While the Duke and Duchess of Cambridge swan around New Zealand with young Prince George, Kiwis are beginning to think about ditching an important symbol of their British heritage.

Not the British monarchy, although Kiwis will rid themselves of that institution in due course. No, the debate is about changing New Zealand's flag, partly because it has the Union Jack in the corner and partly because it looks so much like the Australian flag that all but the nationals of those two countries have trouble telling them apart.

Little bothers New Zealanders more than being mistaken for Australians, their much more numerous and more rumbustious cousins – just as Canadians take umbrage at being confused with their American neighbours. The Australian and New Zealand flags both have the Union Jack in the upper-left corner, and they both depict the Southern Cross, with the Australian stars being white and the New Zealand ones being red. Foreigners really can be forgiven for mixing up the two, which is precisely what sometimes irritates Kiwis.

Prime Minister John Key, an avowed monarchist (and a buddy of Prime Minister Stephen Harper), wants a new flag. Last month, he pledged a referendum on the matter if he's re-elected this fall, which is highly likely.

"Back in 1965, Canada changed its flag from one that, like ours, also had the Union Jack in the corner, and replaced it with the striking symbol of modern Canada that all of us recognize and can identify today," Mr. Key said last month.

"Fifty years on, I can't imagine many Canadians would, if asked, choose to go back to the old flag. That flag represented Canada as it was once, rather than as it is now."

Mr. Key is right about that. Many Canadians will recall the "flag debate" in which former prime minister John Diefenbaker led his Progressive Conservatives in a ferocious and protracted parliamentary battle to preserve the Red Ensign. Mr. Diefenbaker was on the wrong side of history (as he often was, despite today's Conservative attempts to lionize him). Today, almost no one wants to return to the Red Ensign. Apart from hard-core Quebec secessionists, the red Maple Leaf is liked and admired both in Canada and abroad.

Mr. Key wants a Kiwi equivalent. Being a monarchist insulates him from those who see a dastardly plot to rid New Zealand of the British monarchy. He acknowledges that some day, his country will want to replace the monarchy with something else – but no time soon. (Public opinion polls show New Zealanders split on that subject.)

The three old "white" Empire/Commonwealth dominions – Canada, Australia and New Zealand – have dealt with the symbols of the British connection differently. Canada changed its flag half a century ago but has never seriously debated the monarchy. Australia had a national referendum on replacing the Queen (it was rejected) but only a marginal debate has surrounded the flag. And now New Zealand is getting ready to debate a new flag, but is punting the monarchy issue.

Replacing the flag will be put to New Zealanders within three years of the fall election. Replacing it with what, though? Canadians might recall that the red Maple Leaf design was not the first choice to replace the Red Ensign. It emerged over time in parliamentary hearings.

The All Blacks, New Zealand's national rugby side, are arguably better known around the world than the country's flag, what with their championships, their Maori war chant and their distinctive black shirts with the white fern.

The fern might garner plenty of support, but what about a largely black national flag? How about the fern and the Southern Cross? One such design from a decade ago had a white background, a blue fern (for the ocean) and red stars (for the Maori and wartime sacrifices).

What about incorporating a Maori symbol into the overall design? The Maori were the original inhabitants of New Zealand and make up about 11 per cent of the population. Would the Maoris want their symbols mixed up with a broader national one?

Whether to change is one thing, but what to change to is quite another, as Australia discovered when those who wanted to ditch the monarchy failed to coalesce around a single alternative.

How to fix a flag: New Zealand set to go the way of Canada and drop the Union Jack
March 11, 2014
Opinion
Monarchy’s role in government: Most Canadians want fixes, but how?
August 7, 2013 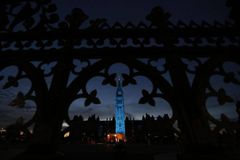