François Dufour is editor of PlayBac Presse in France

An emergency situation requires an emergency solution. To stop the shipwrecks and the drownings in the Mediterranean, let's put the presumed refugees (or "would-be refugees" as described in the British press) on planes directly to Europe.

In the past year, about half the migrants crossing the Mediterranean were asylum seekers. The other half were economic migrants searching for jobs. That's another story that I won't address here.

According to the UNHCR (the UN Refugee Agency), two migrants out of three in 2015 have been asylum seekers coming principally from five countries: Syria, Afghanistan, Eritrea, Somalia and Nigeria.

Consequently, one migrant out of two on those death-boats has the right to go to Europe. More importantly, Europe has a duty to protect them.

The 1951 Geneva convention protects any "person owing to a well-founded fear of being persecuted for reasons of race, religion, nationality, membership of a particular social group or political opinion."

Europe also protects (this principle is called subsidiary or temporary protection) those who would face serious risks if they return to their home country.

Here is the problem: If they have not received refugee or protected-person status, or at the very least an asylum visa, they cannot present themselves at airport check-in counters.

This is despite the fact that a flight would be less expensive and infinitely less risky, as demonstrated by the very convincing video made by demographer Hans Rosling (available on YouTube at https://youtu.be/YO0IRsfrPQ4).

The common sense solution is to grant them refugee or protected person status in situ.

To do this, one must answer two questions: Who grants this status? Where could it be granted in situ?

A first option: a UNHCR centre in Tripoli or elsewhere on the African coast with the power to grant refugee/protected person status, on behalf of European countries.

A second option: a European union embassy with the same power in a few safe countries (that have flights to at least one European country): Algeria? Tunisia? Morocco? Sudan? Djibouti? Kenya? Lebanon? Countries that are safer than the ones the boat people are fleeing: Eritrea, Syria (for half of them, in 2015). But also: Somalia, Nigeria, Afghanistan, Iraq. And this must all be accomplished with great expediency as demanded by this emergency.

Bear in mind that very few future refugees are requesting an asylum visa from, say, a French consulate in Africa, authorizing them to seek asylum or protection in France, especially as the French agency for refugees (l'OFPRA) can take three months to two years to resolve application requests.

Both options (via the UNHCR or via a European embassy) then require the repartition of the total number of refugees among the 28 EU countries.

Two main criteria could be used: population and wealth (GNP per inhabitant) and, of course, the foreign languages spoken by the refugees.

Another advantage of this on-the-spot solution: It would reduce the large number of rejected asylum seekers in Europe who stay illegally (about three out of four) and live in poverty.

For the past 10 years, I have interviewed African youths, both boys and girls, on the Italian island of Lampedusa.

During their journey, they have been robbed, assaulted, exploited, some of them tortured, others raped. Without mentioning all those who have drowned.

Why did they take such chances? Abdi (15) and Sihan (17) left total chaos in Somalia.

Mohamed, an 18-year-old boy from Eritrea, refused to be chain-ganged for life into the dictator's army. Just like Abel (16) and Rubel (17). Gift (18) from Nigeria, fled Boko Haram. Cynthia, a Nigerian 18-year-old orphan, was sold by her uncle.

After hearing their stories, I always say to myself: In their shoes, I too would have fled toward the Mediterranean.

Opinion
Mobility will stop the migrant tragedies, not the military
May 13, 2015 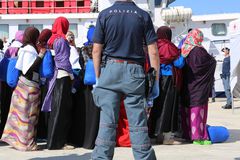 Tragedy of the Muslim Rohingya echoes past injustices
May 28, 2015 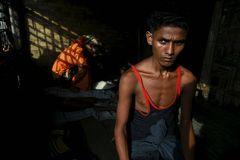 Opinion
Beyond rescuing migrants, we must recognize and share their humanity
June 11, 2015