The amazing thing about any given Ford Fest is the diversity of people who will tell you the exact same things.

Old white ladies and young black men, long-established Scarborough residents and newcomers from Nigeria, the loudmouths and the philosophical, the leery and the cheerful. "I've been watching politics for 40 years, and it's only once in a long while a sincere politician comes along, who really cares about the people," a thoughtful, soft-spoken 85-year old woman told me as evening turned to night, pausing en route to her car.

Many years ago, she'd canvassed for the NDP under Stephen Lewis – another man of the people, who she said once sat down next to her and expressed his admiration for conservatives who were true to their principles. She doesn't see much contradiction in liking Toronto mayor Rob Ford today: He's real, she said.

I arrived at Ford Fest last Friday evening just as things were coming unhinged on the side of the hill. Thousands of people had shown up at the gathering, which was held in the big green bowl of Thomson Park in Scarborough. It had also attracted protests from the increasingly restive anti-Ford citizens, including a few from the city's queer community, finally fed up with the mayor's passive-aggressive taunting.

There formed an enormous, screaming knot of people, cellphone cameras raised above heads, and TV cameras hoisted above those. In the centre, an elderly Ford supporter in a battered Canadian Forces uniform had his arms held protectively to either side of an even tinier young woman, an LGBT protestor. (Over the hill, one Ron Banerjee, a garrulous pro-Ford, anti-Muslim activist, had actually put his hand to a protestor's throat, before he appeared to realize that he too was being filmed, and scurried away.) Presently, a wildly gesticulating man was screaming at the old soldier about how Liberals were turning Canada into a socialist third-world country.

The crowd broke itself down like a stadium concert: There were hangers-on, there were fans, and then there were the super-fans, the costume-wearing true believers in whom something snaps in the midst of crowds and pressure. Small packs of excited individuals were running from one happening to the next, barging into the frame of any TV interview they could spot, waving flags and hollering "Rob Ford! Rob Ford." I caught one, a thoroughly muscled young man in white t-shirt and baseball cap, as he came off one of these. Quickly becoming conversational, he gave a précis of what I heard over and over from other attendees.

"He's a down-to-earth guy. He's a real guy," said Desmond Carr, the young man. "Everybody in this world is not perfect. We all make mistakes. He admitted his mistake, we're moving on. This is what the world's about. Everybody has their own points of view, and what they believe, and he has his own point of view, and what he believes in."

A circle of his friends materialized behind him, chiming in.

"I just think he's doing something for the city that other mayors couldn't do, even though he's not perfect, right?" said Daniel Barrett, who spoke gently and deliberately. "He's making it more recognized internationally, to other cities."

"He got Jimmy Kimmel," someone said.

"Maybe he's doing it in a phoney way, but he's putting the city out there," said Barrett.

Another young voice called out from the back. "They hate him cause he's homophobic."

A stone's throw away, thousands of people stood placidly in two great lineups, one to meet the mayor, who was being mobbed in a small tent in the distance, the other for hamburgers.

"That's not the real Ford Nation," said Bev Underhill, a Scarborough resident standing in line, sunglasses over his face, gesturing to the ruckus behind him. Most people, he argued, don't care about Pride one way or the other. So what does it mean to be a part of Ford Nation, then? He shrugged for a second, then said, "It means the real people."

The word "real" kept coming up, which is odd where it comes to a mayoralty that's only vacillated between unreal and surreal. Everybody wants a "real" mayor, and everyone wants to be the "real" people. Suburbanites like to say they're the real people, but then, downtowners do the exact same thing. The whole notion of "Ford Nation" is just as much a creation of progressives who'd like to lump their foes into one handy bucket that can be waved off, as much it is of the Fords, who'd like to pretend they actually have a nation.

But Mr. Ford's core constituency is not a group of any given colour or creed, but a coalition of people who feel they're on the outside of a booming, changing city. There are lots of different ways to feel alienated – geographically, economically, culturally, ideologically – and Mr. Ford appeals to all of them. Those alienations will still be there, even if Mr. Ford goes away – they just won't be so conveniently gathered in one place.

His supporters aren't dupes. They know they're backing a guy whose chief talent is causing all hell to break loose downtown. Ford doesn't offer them solutions, but he does offer them attitude. And since that attitude is sincerely held, the dishonesties that crop up along the way are incidental. This is Rob Ford's great realness: he believes his own swagger, and he's got just the swagger that his supporters crave. Finally, somebody's honest-to-god swaggering for them. 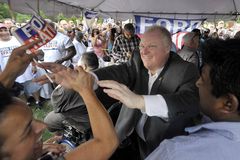 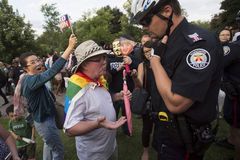