The friendly market takeover of CanniMed Therapeutics by Aurora Cannabis will have a significant impact on the cannabis production and distribution landscape in Alberta.

And though predicting whether the development will be malignant or benign is difficult to do, the takeover is the largest deal in the budding sector to date and will have a tangible effect on provincial bureaucracy, government coffers and Alberta's economy, both as it affects Albertans and as it relates to Canada as a whole. As such, and for better or worse, it will at least marginally shape the social fabric of the province.

Alberta was the first province to begin its policy development in preparation for cannabis legalization. The government began by commissioning a massive evidence synthesis (the Cannabis Evidence Series) covering five key topics: health effects and harms, medical cannabis, advertisement and communication regulations, experience with legalization in other jurisdictions and the current Canadian context. This fed directly into the Alberta Cannabis Framework, which is the beginning of the proposed legislation that will eventually regulate cannabis production, sales and use. The framework lays one of most unrestricted private markets of all the provinces so far, placing the province on a path to replace oil with pot.

On the plus side, Alberta is in need of economic diversification. With unemployment rates currently at 7 per cent, rejuvenated industry is what's required. Producing cannabis in a regulated environment requires security and traceability, well-developed compliance standards and processes, logistics for retail, packaging and processing, testing capabilities and protocols, not to mention grow warehouses and gardeners. The larger the operation, the more jobs will be generated. These jobs will be a mixture of higher- and lower-paid roles requiring a variety of professional skills. This is a good thing as many still struggle to find work after being laid off from the oil fields and the associated industries.

In Alberta, private retailers will sell cannabis to those wanting to purchase in-person. This is unlike some other provinces, who have chosen to establish government-operated retail outlets for cannabis, continuing the current model for alcohol sales. For those of us who remember the government-operated liquor store days of Alberta, privatization led to many more outlets, longer hours of operation and greater choice. If the same pans out for the cannabis market, we can expect to see a range of choices in style of outlet and product, driving further product diversification. With a major producer such as Aurora paving the way in Alberta, we may see early emergence of microgrowers further bolstering the industry.

Online sales will be government operated. While the tendering process is unclear, one could assume that Aurora, having a strong foothold in Alberta, will be a major contender for role of supplier. If this occurs, the operation would likely expand again to meet an increased demand. All this production and sales will generate revenue. The province will see tax revenue from sales as well as corporate tax revenue from a healthy business market. But make no mistake, the administrative costs of the regulatory oversight required for this market will be substantial. But there are economies of scale; a minimum level of regulatory oversight infrastructure is required no matter the strength of the market.

Of course, one concern is who is going to smoke all this cannabis we are producing? According to the Canadian Alcohol and Drug Use Monitoring Survey completed by Statistics Canada in 2012, 34 per cent of Canadians report they had ever smoked and 11 per cent say they had smoked within the previous year. We already have among the highest rates of use globally. People are already sourcing their cannabis effectively.

The hope is that the legal market will be competitive enough against the black market to push people toward legal retail sources, which offer a safer, more consistent and regulated supply for a similar price. Based on the experiences of other jurisdictions that have legalized cannabis, there has not been a marked increase in use. But it is early days for everyone, with the first U.S. state only having legalized cannabis in 2012. We need to watch, learn and act nimbly in response to concerning trends.

Lastly, do we want this in our backyard? By all indications, cannabis will be legal in July. Yet there are many things that remain unknown. For example, what are the public health risks of working in a cannabis grow operation? What is the environmental impact of production facility waste? What are the societal impacts of having a grow operation as a major source of employment in a community?

Much like the oil industry, we will come to learn the full impact of these choices over time. Alberta may reflect on this as the game-changing pivot point in economic diversity, or the choice that made it Canada's drug dealer.

Globe editorial: When it comes to legal pot, will renters be equal under the law?
January 17, 2018 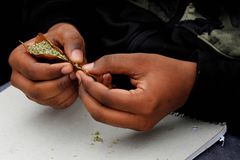 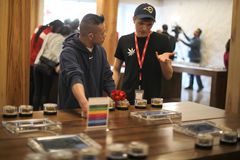 Opinion
Who knew legalizing marijuana could be so complicated?
December 5, 2017
Follow us on Twitter @globedebate Opens in a new window
Report an error
Due to technical reasons, we have temporarily removed commenting from our articles. We hope to have this fixed soon. Thank you for your patience. If you are looking to give feedback on our new site, please send it along to feedback@globeandmail.com. If you want to write a letter to the editor, please forward to letters@globeandmail.com.
Comments are closed