Amira Elghawaby is the communications director at the National Council of Canadian Muslims and Bernie Farber is a founding member of the Jewish Refugee Action Network.

We know very little about Alan other than that Canadian relatives were trying to find a way to bring him and his family to Canada. We don't know, for example, whether he was a member of a minority religious sect in Syria. That should be irrelevant. Ethnicity, culture, race, class – none of those categories matter when we witness such dire human need, senseless suffering and death.

And yet, unbelievably, it isn't a stretch to wonder whether this young boy's faith would have prevented his family, or others like theirs, from finding asylum in Canada. The Canadian government has explicitly stated its intent to grant refuge to religious minorities fleeing Syria, contrary to international norms that assess refugees primarily on the basis of need.

It is clear that the magnitude of this disaster has not been seen since the end of the Second World War. The number of asylum seekers claiming refuge from persecution and danger today rivals Europe's postwar crisis. Canada's record prior to the war was to deny refuge to Jews fleeing oppression in Germany, Russia and other unwelcoming countries. We've already lived through a "none is too many" immigration policy; we must avoid unintentionally reinventing that shameful past. Yet, many have reasonably argued that when it comes to Muslim refugees today, especially from war-torn Syria, the anti-Muslim rhetoric falls dangerously close to what Canadians heard in prewar times.

The United Nations reportedly balked at Canada's request to select refugees based on religious background. Here at home, a coalition of settlement agencies and faith groups publicly denounced the government's position when it became public late last year. "A person should never be excluded from refugee protection or resettlement on the basis of his or her religion," reads the joint statement signed by the Canadian Council of Refugees, the Canadian Council of Churches, the Jewish Refugee Action Network and many others. "In responding to situations of conflict where people are divided by religious affiliation and persecuted for their religion, it is all the more important that Canada assert that our humanity unites us all and that discrimination based on religion is unacceptable. Refugees must be selected for resettlement based on need."

The Canadian government's departure from established refugee norms began in 2012 with the passage of new laws which created a two-tier system based on country of origin. Canada began to categorize refugee claimants based on group characteristics rather than using a case-by-case approach.

"Group labelling tends to exclude, not welcome. Placing individuals above categoric exclusions is the best way to ensure Canada continues granting asylum to people who need it most," migration expert Dana Wagner wrote in a 2013 article for the Canadian International Council. It isn't to deny the role of group identity in understanding why individuals and their families may fear persecution, or violence, in their countries of origin. It is simply to include it as one of many factors that must be examined in an individual's claim.

And while it's heartening that private groups such as Lifeline Syria have emerged with a goal of sponsoring 1,000 refugees in the next two years, this simply isn't enough.

We owe it to the countless Syrian families seeking a safe haven to insist that the Canadian government rethink its policies on this issue. Canada must fully align with national and international norms and expectations. Leaving it to private groups, churches, mosques and synagogues does a disservice to the collective soul of our country. 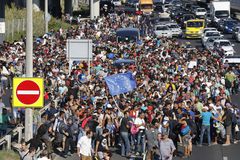