George Petrolekas is on the Board of the CDA Institute, and co-author with Ferry de Kerckhove of the The Strategic Outlook for Canada – rated by the US Global Think Tank Index as the 36th best strategic policy document in the world.

In the wake of jihadi-inspired attacks, all nations in the West have debated how to best protect their societies from videos seeking to inspire loyalty to jihadi causes, recruitment to their efforts or arousal to action through lone-wolf attacks. Ironically, al-Qaeda's English-language magazine is called Inspire and has taught the methods used in the Boston Marathon attacks.

For some, the answer is the current military campaign to destroy the source, if possible, of this inspiration. Yet many are wary that our military involvement will only feed the flames of further alienation and radicalization, which is best arrested by assisting states to establishing better governance.

At home, a few voices have spoken about the resiliency of our society, which is stronger than the effect of any propaganda on a marginalized few. Yet many cling to the notion that safety can be only found through stronger police and intelligence powers, restrictions to speech and by monitoring social media.

We are not shown the full video of the Jordanian pilot's horrendous execution – and rightly so. It is ghastly, but it does exist and is available to those who seek it. IS uses meticulous argument to justify its horror; what's missing is an answer to that argument.

Recently, France launched a wide and hard hitting counter-narrative offensive against the propaganda of the Islamic State. It's most outward manifestation is a video launched by the French government that aims to discourage young French nationals from joining Islamist jihadi fighters in the Middle East. It counters propaganda used by Islamic State and dispels myths about its cause. It encourages people to help identify the warning signs in brothers, sisters, friends and family of an incipient radicalization.

If there is a debate to be had, it will be whether government should be in the business of countering propaganda and whether the "community" should be the source of a counter-narrative against radicalization. To split such hairs ignores the fact that in a free liberal democratic state, the government has often been the expression of the community.

The campaigns for equality and against racism might have crystalized at Selma but only gained impetus when the government moved on its aims through laws, actions and, yes, education campaigns.

At some point, the community or the enabler is government. It isn't propaganda; it is the delivery of a truth. We don't object to campaigns against drunk driving, we don't object to campaigns against bullying, or to monies spent in celebration of our history, such as the creation of our flag. In fact, we often complain if government does not spend money in those efforts. One cannot have it both ways.

The real question is why has it taken so long?

Canada should applaud and emulate what France has done; after all, it is what everyone says we need. Kudos to France, they are acting while others talk.

Opinion
France shows West the smart way to fight IS at home
May 12, 2018 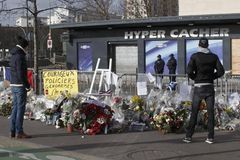