"Trade is about people," Foreign Affairs Minister Chrystia Freeland began cheerfully as she testified before a parliamentary committee on Monday, telling MPs that trade agreements encourage growth and prosperity. "That is why we are modernizing NAFTA."

Well, no. This was not Canada's idea. Ottawa's negotiators are not heading into talks on the North American free-trade agreement this week because Canadian officials had nifty ideas to make a 23-year-old deal, as Ms. Freeland said, "even better." It is happening because Donald Trump campaigned for the U.S. presidency asserting that NAFTA caused many of the ills affecting U.S. workers. He promised a better deal for Americans, or to tear it up. NAFTA advocates came up with the word "modernization" to try to deflect him into something all three partners can accept. But we got here because of what the Americans want.

Ms. Freeland made a flurry of public appearances on Monday – a speech, a committee hearing and a news conference – but they were not about what the Americans want. They were about making Canadians feel better about being dragged into the whole thing. It was about what Canadians, especially left-leaning Canadians, want – not from the negotiations, but in a political approach to trade.

As a set of market-access priorities in a trade negotiation, Ms. Freeland's position was defensive, asking for little. In reality, her presentation was more about signalling a set of virtues the government will take into the talks, and less about what it expects to get out of them.

Ms. Freeland laid out Canada's six priorities for NAFTA talks, only one was a major demand for new access to U.S. markets – an effort to obtain freer access to government procurement.

That is no small item. NAFTA does not offer free trade in contracting by sub-national governments such as states and provinces, so Canada has repeatedly fought "Buy American" provisions. But it is also something that U.S. Trade Representative Robert Lighthizer specifically said he will exclude from a new deal when he sent a list of formal U.S. negotiating objectives to Congress.

Still, it's good to ask for some things the Americans do not want to give up. They will do the same.

In fact, they will do it far more. The Americans are asking for a lot of protections for their markets, and access to Canada's – a freer hand for U.S. telecommunications and financial-service companies to do business in Canada, an opening of agricultural markets, larger duty exemptions of cross-border orders from companies such as Amazon, the ability to limit Canadian and Mexican imports when there is a sudden flood on the market for specific products, and a general objective that the reworked NAFTA should reduce U.S. trade deficits.

Most of the Canadian priorities seem to focus on fixing things that critics, especially on the left, dislike about trade deals. That fits with the way Prime Minister Justin Trudeau has called for "progressive" trade agreements since the closing of the Canada-EU trade deal.

Ms. Freeland promised to work to reform the investor-state dispute mechanism in NAFTA's Chapter 11 that allows companies to sue governments over decisions that harm their investments – a provision that has always irritated progressives, who see it as a way for companies to beat back public decisions on things such as environmental protection. U.S. companies have used it successfully against Canada. But it is not clear how the Trump administration would respond.

Canada wants to include chapters on gender and Indigenous peoples, but it's not clear how much substantive effect they would have: The gender chapter recently added to the Canada-Chile free-trade agreement has no palpable effect, and Ms. Freeland did not provide even a hint of what an Indigenous chapter might look like. The Canadian government's desire to incorporate labour and environmental standards in the main NAFTA text should not be too hard a sell, since it is on the U.S. list, too. But serious NAFTA rules about climate change? They simply will not happen.

But perhaps it is not too surprising that the priorities Ms. Freeland put forward were mostly about values, and that when it came to actual markets, the plan was defensive. Despite Ms. Freeland's optimism, Canada is on defence. In a nitty-gritty trade sense, the plan is to make a deal that minimizes disruption. On Monday, Ms. Freeland's job was to assure Canadians that Ottawa is seeking something positive. 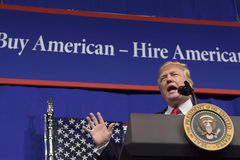 Opinion
Will Trump use the 'madman' strategy in NAFTA negotiations?
Subscriber content
August 13, 2017

Opinion
Trudeau loads up NAFTA’s ark with every species of critic
Subscriber content
August 2, 2017
Follow Campbell Clark on Twitter @camrclark
Report an error Editorial code of conduct
Due to technical reasons, we have temporarily removed commenting from our articles. We hope to have this fixed soon. Thank you for your patience. If you are looking to give feedback on our new site, please send it along to feedback@globeandmail.com. If you want to write a letter to the editor, please forward to letters@globeandmail.com.
Comments