Go back to 2007. André Boisclair, then leader of the Parti Québécois, was reminiscing to a group of students about his days at Harvard.

He marvelled at the number of students of Asian heritage he encountered there: "I was surprised to see that on campus, about a third of the undergraduate students had slanted eyes." The anglophone media could not conceive that in this province, in this culture, in this language, using "les yeux bridés" to describe an Asian person is not a racial slur. A media firestorm was born.

Mr. Boisclair's political opponents made no issue of the comment. In La Presse, to show how absurd the complaints were, I offered this example: There is a restaurant in Montreal called "Les Bridés." It's owned by Québécois of Vietnamese descent.

The past weeks, another of these controversies, mostly fuelled by anglo media and commentators, engulfed Quebec. This time, it was about blackface at Montreal's Théâtre du Rideau Vert, where the farcical end-of-year review featured a white actor, in black makeup, portraying the hugely popular Montreal Canadiens star P.K. Subban, who was a big newsmaker in 2014.

The skit raised no eyebrows from French reviewers. That's because blackface, used in the detestable minstrelsies that used to portray stereotypical and generic versions of blacks as dimwitted, are not as well known in French Quebec as they are in English-speaking North America. The term blackface doesn't even have a French equivalent.

The Rideau Vert controversy was a replay of the 2013 Gala Les Olivier controversy. When philosopher king and comedian Boucar Diouf, of Senegalese descent, was portrayed in blackface by colleague Mario Jean (who also played other Quebec comedians in the feature), no concerns were raised by the province's French media. The outrage came first from anglo media outlets and commentators. Mr. Diouf himself confessed to not knowing about the blackface stigma; he said he was not offended.

I wrote about Rideau Vert, highlighting that French Quebec sometimes has different cultural codes and taboos than you find in the United States and the rest of Canada. I offered the Charlie Hebdo covers as an example: News outlets in France and Quebec published them (offence-takers be damned) while anglo media in Canada, Britain and the United States mostly balked.

I also argued that while using blackface to stereotype an entire race is indeed idiotic, we may be confusing plate and meal when makeup is used to impersonate someone in a positive way, as in the cases of Mr. Subban and Mr. Diouf. Just as sometimes a cigar is just a cigar, black makeup is sometimes just black makeup.

The criticism in my inbox and on social media – levelled in English, mainly – was tough. But, in hockey parlance, the hits were mostly legal. I understand that discussions about race are going to be lively.

Globe theatre critic Kelly Nestruck was the only commentator of note who gave me a cross-check to the face. He distorted my 925-word column into a one-sentence quote that came within an inch of calling me a racist, and then, in a francophobic fashion, painted Quebeckers who didn't object as backward dimwits.

But hey, he flashed his credentials: Mr. Nestruck has francophones in his family, hailing from Quebec.

Guess how patronizing I would have sounded if I'd written that I have black friends. Then again, in the ROC commentariat, one can say stuff about Quebeckers that they wouldn't dare say about other people. Plus ça change …

P.K. Subban not fazed by classless acts of sportsmanship
May 2, 2014 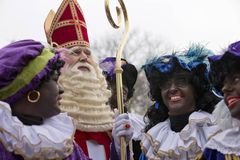