Perhaps it is just the season of peace and goodwill, but many hockey observers who were all over the NHL this year for its inaction on head shots and fist fights are today feeling just a bit sorry for hockey.

It is as if the Dark Ages have unexpectedly rolled back, the relief of only three weeks ago – when Sidney Crosby returned after 11 months of struggling with postconcussion syndrome to score four points against the New York Islanders – instantly turned to distant memory. Crosby has not scored a goal since his two that euphoric night of Nov. 21.

This past weekend, his Pittsburgh Penguins announced he would skip two road games as a precaution after "not feeling 100 per cent" following two slight on-ice collisions. Then, on Monday, Crosby failed to show at the Penguins' morning practice. He later announced that he would not play in Tuesday's game against the Detroit Red Wings. (The Penguins are also scheduled to play the Senators in Ottawa on Friday.) While Crosby called the setback beyond frustrating, he added that: "After talking with everyone, I figured it was better to be cautious and not take any chances. That's where I'm at right now."

What is curious about this turn of events is that here the NHL is blameless. Even if head shots had been eliminated and all fighting banned, this setback could not have been prevented. Teammates will always collide, accidental hits to the head are impossible to prevent.

The absence of hockey's 24-year-old superstar has sucked the wind out of sails that billowed in late November when the native of Cole Harbour, N.S., returned with such fanfare. In the days following the Penguins' 5-0 defeat of the Islanders, the hockey world was aTwitter with predictions that he might even win the NHL scoring race.

It turns out the announcement was premature.

In a bizarre coincidence, the current NHL scoring leader, 23-year-old Claude Giroux of Hearst, Ont., is also out after suffering an accidental hit to the head – delivered by a teammate's knee – in a game against the Tampa Bay Lightning. Giroux will miss Tuesday's game against the Washington Capitals. So, too, will Flyers captain Chris Pronger and rookie Brayden Schenn, both sidelined with concussion-like symptoms.

Last season's rookie of the year, 19-year-old Jeff Skinner of the Carolina Hurricanes, is also out of action following a heavy hit during a match against the Edmonton Oilers. The team has not disclosed the nature of the injury suffered by the native of Markham, Ont.

But player injuries are not all the league has suffered through in recent days. An exhaustive New York Times investigation into the life and death of New York Rangers brain-damaged enforcer Derek Boogaard has taken an issue long familiar in Canadian media and given it new prominence in influential American circles.

As well, the rising concern over the long-term effects of taking shots to the head in a league that refuses to ban fighting took a blow itself this past week when a Canadian company, In The Game, produced a series of blood-spattered trading cards celebrating NHL fighters. One card, for former Toronto Maple Leafs enforcer Wade Belak, who died under mysterious circumstances last summer, "disgusts" Belak's mother.

But nothing compares to the effect Crosby's long-term concussion had on the game this year and the unknown effect that his problems may have in the future. Crosby is not only the face of the NHL but is beloved in Canada as the scorer of the goal that gave Canada the Olympic gold medal in Vancouver in February of 2010. Concerns for his health reverberate beyond the Pittsburgh team and beyond the league itself to the very roots of hockey, where minor-hockey parents are increasingly concerned about the effects of head hits on the health of their children.

With Crosby sitting out again, there is growing worry that his career path might follow that of Paul Kariya, a budding superstar whose potential greatness was snuffed by a series of concussions. When the 36-year-old Vancouver native finally retired from the game this year, he told The Globe and Mail's Eric Duhatschek: "The thing that I worry about is that you'll get a guy who is playing with a concussion, and he gets hit, and he dies at centre ice. Can you imagine would happen to the league if a guy dies at centre ice?"

Reeling again, the league is pinning its hopes for recovery on its Winter Classic outdoor match that in recent years has caused a rise in interest and American television ratings. This year's match is set for Jan. 2 in Philadelphia, the Flyers playing host to the Rangers.

However, should Crosby not return by then, that much-trumpeted outdoor game will only serve to remind of the previous outdoor match, New Year's Day 2011, when Crosby suffered the first hit to the head that would send the NHL into its dark spiral.

Analysis
Sidney Crosby is doing the right thing by sitting out
December 13, 2011 Crosby trudges back to the sidelines with concussion-like symptoms
December 12, 2011 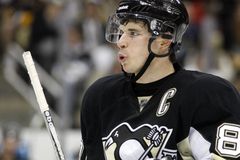 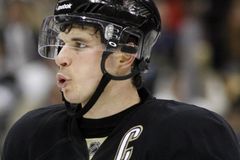 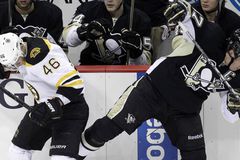 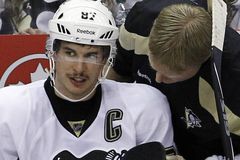 Is it turnaround time for Leafs' penalty killing unit?
December 11, 2011 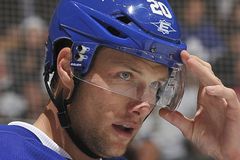