This is an exciting year for our great nation: Not only is it Canada's 150th birthday, it is the 100th anniversary of the Battle of Vimy Ridge. At 0530 hours on April 9, 1917, Canadian soldiers, wonderfully prepared for this battle, emerged from tunnels and attacked through snow, mud, barbed wire, machine-gun fire and artillery barrages. By noon, most of Vimy Ridge had been captured, something no other nation had been able to do.

That victory captured the world's attention and became a beacon of hope and inspiration in a time of despair. The Allied landings at Gallipoli had been a brutally rebuffed disaster. French and German armies bled to death in a cauldron of destruction at Verdun. And on the Somme, the British attack was an unmitigated tragedy, causing more than 500,000 casualties over 147 days of fruitless dying. Great on its own, Vimy quickly became the example for what was possible with a new approach. At the centre of Vimy, and new approaches, were the Canadians.

Vimy gives us a blueprint that has guided our very democracy. First: Strong, visible, personal and ethical leadership is crucial to success. Generals Byng, Currie and Turner, among others, became renowned for that leadership. Second: The power of teamwork, when all the individuals, units and divisions came together for the first time, was incredible. The infantry, artillery, cavalry, signallers, engineers and others were part of one team with a clear mission. They fought as a Canadian family and nothing would stop them. Third: Innovation, particularly in the artillery under Andrew McNaughton, which other countries soon copied, destroyed the enemy's ability to defend. Last: Empowering individual soldiers with simple things such as maps allowed those soldiers to apply their ingenuity. They won the small fights that led to the greater victory.

A hundred-thousand men may have gone up Vimy Ridge, but they came back down as Canadians. Our country had come of age.

This year, we remember those who took Vimy, the more than 650,000 Canadians who served in the First World War, the families who stood behind them and, especially, those who died or were maimed in body or mind. We'll remember by wearing poppies, reading In Flanders Fields, visiting graves and attending ceremonies. As these acts of remembrance end, however, so too, I fear, will our attention to the mentally and physically wounded among Canada's present veterans. That would be a tragedy. Men and women in service are sustained and inspired by support from home. That support is even more important when our sons and daughters return to Canada. They will return to a society ill-equipped to support them, with few people who can truly understand the stress of service and the violence of a war zone, be it Vimy or Kandahar.

When Kandahar was in the headlines, it was easy to raise awareness and funds to support veterans and their families. Thankfully, that final journey of a Canadian son or daughter down the Highway of Heroes is now infrequent. That also means, however, that we infrequently remember the physically and mentally wounded veterans of today.

Now, as the compassionate people we are, who, as Rabbi Reuven Bulka said, "love our troops," Canadians need to harness the emotion of Vimy 100 and express it throughout the year. True Patriot Love, and the few other military-family organizations we have, work diligently to inspire Canadians, corporations and governments to do exactly that.

The True Patriot Love Foundation (TPL) is a national charity with the mission to inspire every Canadian to contribute to the resilience and well-being of our military and veteran families. Since 2009, TPL has provided more than $18-million to support military families, including supporting more than 100 community-based programs across the country that address the unique challenges resulting from service including mental health, physical rehabilitation, transitioning to civilian life and the special needs of children.

As we mark Vimy 100, remember the proud Canadians who took Vimy Ridge and gave us examples of leadership, teamwork, innovation and empowerment on which we now base our nation. But remember also the men and women who served this generation. Those who – with their leadership based on service before self, diverse teams more powerful than ever, ingenuity in the execution of their missions, and empowerment – make the world a better place for Canada and Canadians. We have much more to do to recognize their service.

This April, please do more than remember. 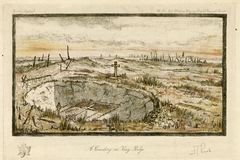