It was a nightmarish week in America. On Saturday, Hurricane Irma smashed into Florida, while in the West, wildfires spread so far that smoke covered much of the continental United States.

Climate change is devastating the landscape and threatening lives, but instead of having a president prepared to confront the crisis, we have a science-adverse autocrat who went straight from reality TV to control over the nuclear arsenal. President Donald Trump's baiting of North Korea last week panicked an already exhausted public trying to process natural disasters, neo-Nazi violence, Kremlin collusion, and threats of mass deportation.

Tough times called for tough words. And so, on Sunday, The New York Times asked the question on everyone's mind: "What's to be done with Hillary Clinton, the woman who won't go away?"

Yes, the greatest horror of all has arrived, the threat so overpowering it must be silenced at once: Hillary Clinton has written a book. The book is called What Happened, a title which mystifies the punditry. "Has anybody teased out what exactly Clinton is trying to accomplish with this book?" inquired Dylan Scott of the liberal news outlet Vox. "I think the answer, like with the baffling buckraking speeches, is that she wants to make money," replied his colleague Matt Yglesias.

Ms. Clinton, a multimillionaire, has not lacked for money in decades. What she has lacked is the ability to tell people, on her own terms, what happened. Conveying what happened is the most likely goal of What Happened, an autobiographical account of the 2016 election that has been condemned by people who haven't read it. (The book comes out today.) It is not what Ms. Clinton said that has inflamed the punditry, but that she dare speak at all.

Throughout the 2016 campaign, a pattern emerged in Ms. Clinton's public approval ratings. When she addressed Americans directly in high-rated televised events, like the presidential debates and the Democratic National Convention, her public approval went up. When Americans read about her through the filter of the media, who obsessed over her e-mails and created fake controversies around topics like the Clinton Foundation, her popularity plummeted.

It is therefore not surprising that Ms. Clinton would seek to take control of her own narrative. It is also not unique for a politician to write a book; many of the candidates who ran for president in 2016 have done so, and fellow loser Bernie Sanders published his own campaign postmortem one week after the election.

So why the uproar? One can cite the usual reasons: misogyny, the irrational "Clinton Derangement Syndrome" that's gripped the media since the 1990s, and of course, the fact that millions sincerely dislike Ms. Clinton. But the extent of the outcry from liberals, in the midst of so many life-threatening controversies, is perplexing. The wrath Ms. Clinton's book inspired feels like an almost nostalgic aggression, a misdirected anxiety harkening to a time when Ms. Clinton could be judged as a threat and Mr. Trump dismissed as a joke. How much easier it is to rage at the defeated Ms. Clinton, who has sworn off running for office, than to confront the current chaos of Mr. Trump.

Ms. Clinton has been accused of "not moving on" – an ironic twist given that Mr. Trump has spent his whole career reviving D-listers, whether in entertainment, on The Celebrity Apprentice; in politics, where he rescued bigots like Jeff Sessions and David Duke from irrelevance; or in both (in the case of White House staffer Omarosa.) There are many political figures Americans would like to see "move on," including Mr. Trump and his coterie. Yet we are still greeted with the sight of former adviser Steve Bannon spouting white nationalist bromides on 60 Minutes – by any reasonable standard, a bigger problem than Ms. Clinton's book.

However, these are not reasonable times. These are panicked times, and Democrats, when gripped with panic, return to the comfortable pursuit of Clinton bashing. This may seem like a risk-free activity: Ms. Clinton remains historically unpopular for a losing candidate. But it is rash, as it reverts Democrats into the mindset of a bygone era and diverts them from both the brutal policies of the Trump administration and the most serious threat they face in the 2018 midterms, voter suppression. 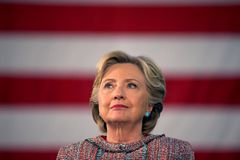 In new book, Clinton says her ‘skin crawled’ as Trump hovered near
August 23, 2017 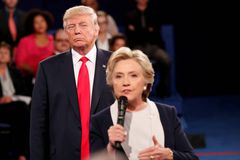