There is a popular view that the highest form of democracy is a referendum. We want to debunk that myth. Democracy is much more than consulting the people in "yes" or "no" decisions.

The Brexit referendum, the Vancouver public transit referendum, the electoral reform referendum in B.C., the California tax referendums, the Quebec sovereignty-association referendums all appeared to be the essence of democracy. A closer look tells us that they violated many of its fundamental principles.

Democracy has evolved over the centuries from the original Greek conception of the people (demos) exercising power (kratos) directly. Democracy requires respect for a few fundamental principles: open and free expression of speech; fair elections in which all citizens can exercise their right to vote; respect for and protection of basic rights and freedoms; and the fundamental rule of law that trumps the rule of any individual, no matter how high her or his office.

What else does a well-functioning democracy need? A free and independent media, independent courts, limits to officials' discretion and regular electoral processes are all essential to a robust democracy.

Do referendums undermine some of these values?

The value of representative democracy has been clear since Edmund Burke wrote in the eighteenth century. Public policy problems are by their nature complex. Representatives, meeting again and again formally and informally, can study, analyze and deliberate before they make their judgments. Referendums, by definition, require simplified "yes" or "no" choices and a one-time only opportunity to vote.

This is not, as some populist critics allege, a defence of "elitism" or the "hubris of experts." Rather, it is an acknowledgment that it is the full-time responsibility of elected representatives to deliberate and come to an informed decision. They are accountable to the voters if they do not, and can be removed from office. Members of the public, by definition, have no such responsibilities or accountabilities.

Referendums also polarize opinion and sharpen divisions among the electorate. It is almost an inevitable result, as partisans on both sides seek to mobilize voters, often by invoking stereotypes and playing to the fears of the public. Witness Jacques Parizeau and Nigel Farage.

The public often responds emotionally to these arguments, especially in a climate of insecurity that is in part the result of leaders on each side manipulating fear to get out the vote.

Especially in these kinds of circumstances, the debate that leads up to a referendum can ride roughshod over the rights of minorities. Immigration in Britain from former colonies surpasses immigration from other countries in the European Union and far exceeded immigration of Syrian refugees. But Nigel Farage used his Breaking Point poster of refugees from the Middle East to whip up passions against the EU. There was no discussion during the period before the referendum that Polish plumbers and Romanian hair stylists were generally doing jobs that Britons were not disposed to do. Polls after the referendum showed that these kinds of attacks against minorities and refugees worked; immigration was the overriding issue among those who voted Leave.

Parliamentary debate is a different kind of process. Debates are a matter of public record and representatives are accountable for their comments. In well-functioning democracies, parliamentarians – not always but often – work to find solutions that serve the interests of the majority but simultaneously protect the rights of minorities. The debate on the right to assisted death in Canada was an example of exactly that kind of debate. For electoral reform in Canada, parliament should study it, consult the public, deliberate and then allow members a free vote on the issue.

Finally, there is a challenge function in parliamentary debate that helps to inform representatives and correct glaring errors of fact. This is especially the case when an independent and vigorous media report on parliamentary debates. This challenge function was largely absent in the run up to the British referendum. Boris Johnson disavowed his allegation that 350-million pounds a week that was going to the European Union would go to the health care system … but only after the vote. Nigel Farage's charge that Britain would be overrun by immigrants from Turkey was finally exposed as an entirely imaginary issue … but only after the vote.

Misrepresentations and outright lies dominated the referendum debate in ways that would have been unsustainable in a contested parliament where members can challenge each other.

The buyers' remorse the day after the vote not only among voters but even among those who led the campaign to leave is evidence enough of the multiple flaws in the process and its failure to meet even the minimalist standards of democracy. Voters in Britain would have been better to rely on the parliament that they had elected. If they didn't like the decision that parliament made, they could throw the bums out at the first available opportunity.

Opinion
Spain looks to Canada for some clarity on separatism
July 7, 2016

Opinion
Was the ghost of Marx haunting Brexit?
June 30, 2016 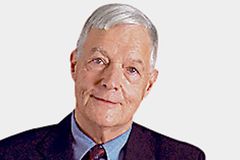