Michael Rennie is Canada Research Chair in Freshwater Ecology and Fisheries and an assistant biology professor at Lakehead University and a research fellow with the IISD-Experimental Lakes Area and was a Department of Fisheries and Oceans scientist for four years. Andrew Leach is an associate professor at the Alberta School of Business at the University of Alberta and was visiting scholar at Environment Canada, 2012-13.

The media debate over the muzzling of government scientists rose another notch this week, with a push by public-service unions to have researchers protected from political interference followed by a television interview with a former biologist at Fisheries and Oceans Canada. Steve Campana's assessment of the sad state of government science goes beyond just censorship of communications, but it resurrects the question of whether there is an appropriate degree of confidentiality required among government scientists, and to what extent public servants should be permitted to object publicly to government policies.

Because government scientists are both researchers and advisers, the public interest is best served if scientists can speak freely about their research. But, like any other public servant, they must be trusted to limit their communication in their role as advisers on policy.

It's possible (even desirable) for some government research to be undertaken in a university-like environment in which researchers are empowered and encouraged to share the results of their work, to engage in scientific debate and to contribute to public knowledge and discussion. While their research and expertise may be called upon as part of the policy-development process, their roles can otherwise be quite disconnected from the day-to-day operations of government. We see this model function well in the United States at agencies such as the National Aeronautics and Space Administration, the National Laboratories and the Energy Information Administration.

To keep government scientists from promoting research of this sort in the media probably does governments more harm than good. Government-based research with a focus on the topic of "what is happening" rather than "should we implement this policy" should be discussed in the public domain, whether through the formal peer-review process or through research reports published directly by government departments. Technical reports published by Fisheries and Oceans Canada, economic research at the Bank of Canada or emissions trends analysis at Environment Canada – all publicly available – are great examples of the latter.

Scientists and other researchers in government also play active and important roles in policy development, and must continue to be able to do so. The acceptable and necessary degree of confidentiality on the part of all public servants involved in the policy-development process is essential when it comes to advice from scientists or other researchers that feeds into policy creation. This confidentiality must be respected whether that advice is acted upon or ignored.

Derrick de Kerckhove and others recently noted that confidentiality and consensus-building with respect to government science in the policy advisory process is not much different from what often occurs among research groups in academia; in either case, collaborating researchers first reach consensus privately around their scientific findings, and then report it publically.

Most, if not all, policy decisions of governments require weighing costs and benefits. Research from various sources, often including government scientists, is used to inform policy-makers of the likely consequences of proposed actions, but at the end of the day, research can't tell you what decision should be taken. Making these decisions is reserved for our elected representatives.

Public servants are sensitive to ensuring that their statements do not counter public policy – it's a condition of their employment. Whether or not public servants are speaking on behalf of the government department on a potential policy decision, their voice will carry more weight because of their association with it. The public service is also heterogeneous in beliefs, personal preferences and, importantly, opinions – it's as diverse as Canada.

When calling for government scientists, or any public servant, to be able to voice their opinions freely on government policy, don't imagine the case of a respected, well-published researcher advocating for the position you believe to be correct. Imagine the opposite – an equally qualified and equally respected researcher advocating for something you loathe – because both would happen and both would skew the development of policy, reducing the objective role of scientific advice in the process to just another voice shouting across the table.

Scientists and other researchers should be free to discuss and provide context for their research, but there must also be limits on communication when it comes to policy formation. Where possible, the evidence gathered by government researchers to support policy decisions should be made public, but not selectively by any single public servant to advance their beliefs with regard to the public interest.

Federal scientists push for protection from political interference
May 17, 2015 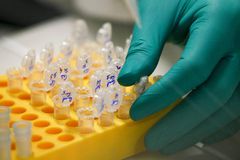 Follow Andrew Leach,  on Twitter @andrew_leach
Report an error
Due to technical reasons, we have temporarily removed commenting from our articles. We hope to have this fixed soon. Thank you for your patience. If you are looking to give feedback on our new site, please send it along to feedback@globeandmail.com. If you want to write a letter to the editor, please forward to letters@globeandmail.com.
Comments