Updates: For the latest news on the crisis in Zimbabwe, click here.

When the scheming spouse attempts to take power and prominence away from a long-time heir-apparent, victory is rarely guaranteed in family or corporate struggles. Nor is such a triumph certain in politics.

In today's Zimbabwe, however, Grace Mugabe, President Robert Mugabe's wife, has prevailed upon her husband to oust his veritable presumed successor, vice-president (until last week) Emmerson Mnangagwa. Next month, Mr. Mugabe will likely anoint Ms. Mugabe as a new vice-president and, constitutionally, as his proper replacement.

Mr. Mugabe is frail and lurching toward his 94th birthday in February. He has ruled Zimbabwe with an iron hand since 1980, driving a once-prosperous economy into near-bankruptcy while enjoying the illicit fruits of rampant corruption. Last week, he named the nation's main airport after himself. He also excoriated citizens who booed Ms. Mugabe at a major political party rally in Bulawayo, Zimbabwe's second city. Police charged several protesters with insulting the president, joining the earlier arrest of a young American woman for tweeting irreverently. She and the protestors are accused, formally, with "plotting to overthrow" the government.

Mr. Mnangagwa, 75, has fled the country, fearing assassination. He earlier alleged that Ms. Mugabe had attempted to poison him. It is believed that together they manouevred Joice Mujuru, an earlier vice-president, out of the succession sweepstakes in 2014. Even earlier, in 2011, Mr. Mnangagwa and Ms. Mugabe may have had a hand in the brutal killing of Solomon Mujuru, Ms. Mujuru's husband, a former liberation war guerilla commander and another potential successor to President Mugabe.

These Byzantine attempts to dominate Zimbabwe's post-presidential succession are deadly because so much is at stake for the pretenders to the throne, if not necessarily for the beleaguered citizens of a country where 90 per cent of all adults are unemployed, where the official currency (the U.S. dollar) has been largely replaced by a Zimbabwe dollar "bond" valued on the street at only 50 cents, and where millions still are fed by the United Nations' World Food Program.

For the pretenders, especially Grace Mugabe, an inveterate shopper with fancy tastes in Hong Kong and Singapore and sumptuous flats in those cities and Johannesburg, there are serious riches at stake. For at least a decade, she (along with security officials and the president) has harvested wealth from diamonds mined in eastern Zimbabwe and sold evasively (to avoid royalty payments to Zimbabwe's Treasury) in Dubai or Hong Kong. More recently, she ousted villagers from prime land and developed a very large dairy enterprise in Mazoe. At her official birthday parties, she demands and receives tribute from the party faithful.

All of that largesse, as well as access to subsidized air excursions and the like, could vanish after Mr. Mugabe dies, unless she can control the levers of state. Mr. Mnangagwa thought that they were legitimately his after nearly four decades serving Mr. Mugabe in several ministerial capacities, enforcing his will against opponents (including an infamous massacre of 30,000 Ndebele from southwestern Zimbabwe in 1983-1984), and collecting "gifts" for Mr. Mugabe from everyone seeking influence. Mr. Mnangagwa is not called "the Crocodile" for nothing.

But Ms. Mugabe, the mother of the president's only children, has been amassing leverage within the household, and latterly within the ruling Zimbabwe African National Union-Patriotic Front (ZANU-PF) party, as the president has increasingly shown his age (falling asleep in party meetings, reading the same speech twice, and generally doddering). But he still makes decisions, clearly more and more at wife's behest. He is also preparing to stand for president once more in 2018.

Ms. Mugabe was a typist in the state house secretarial pool when she caught the president's eye in about 1990. He was then married to Sally, a Ghanaian much respected locally. But Sally was dying from liver cancer. Robert and Grace had their first two children before Sally died in 1992, while Grace was still married to someone else. Subsequently, she gave birth to a daughter after her marriage to Robert in 1996. In those years, cabinet ministers referred to her (in my presence) as "Grasping Grace." Members of the Zimbabwean public often refer to her as disGrace, sometimes Gucci Grace.

Ms. Mugabe is neither popular among citizens nor many members of the ruling party. However, she catapulted herself into a position of influence as head of the ZANU-PF women's league in 2014. Now she has the party's youth brigade behind her just as Mr. Mnangagwa can count on the support of the influential War Veterans' Association. Before he was ousted, observers believed that Mr. Mnangagwa was also backed by leading military figures, especially Constantine Chiwenga, chief of the armed forces. (General Chiwenga fled when Mr. Mugabe sacked Mr. Mnangagwa, but then returned.)

Few informed observers of Zimbabwe's labyrinthian politics believe that Ms. Mugabe can remain powerful after her husband leaves the scene. Much depends on whether Mr. Mnangagwa can return to the contest, conceivably with Chinese and military backing and possibly after engineering a forceful coup. Ms. Mugabe's ultimate fate also depends on how long Mr. Mugabe, the ultimate survivor, stays alive and whether he wins another presidential term. Whatever happens, long-suffering Zimbabweans will be the last to benefit.

Mugabe’s Zimbabwe has an angry population and a potentially violent future
November 13, 2017 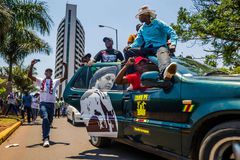 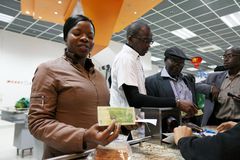 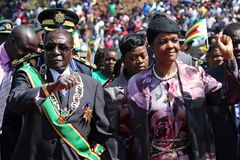