Foreign reporters returning for their six-month anniversary stories are directed to a place called Corail-Cesselesse, a few miles north of Port-au-Prince. Today, it is a barren stretch of disused sugar-cane land, where 5,000 homeless people have been stranded in an isolated tent city as they wait for the future to arrive. This is the site of the model city of the future - a planned community of 300,000, with garment factories, homes, stores and restaurants. A London design firm has already been contracted to evaluate the many proposals from all over the world for the ideal Haitian house, which will then be built and focus-grouped.

Leslie Voltaire, Haiti's ambassador to the UN, says this model city will help transform Port-au-Prince itself into a "Zen city," engineered to be "balanced and serene," as he told The Associated Press. He envisages an international competition to design the new ministerial buildings, which, he says, will be "a museum of 21st-century architecture."

As for the present, things aren't quite so rosy. A million and a half Haitians are still living in temporary shelters, which are in danger of blowing away during hurricane season. There is no resettlement strategy for them. Only 28,000 have moved into new homes. Haiti needs 125,000 transitional shelters, but only 5,500 have been completed. Roving gangs of thugs will hold knives to people's throats to steal their plastic tarps. Ninety-eight per cent of the rubble in Port-au-Prince remains uncleared.

You won't hear this news from the United Nations or from aid agencies or from generous donors such as Canada. All of these players must work with and through the Haitian government, and they are not about to diss it. "Haiti's government has done everything it's been asked to do by international donors to inspire confidence, maintain transparency and ensure that not one single cent is lost to corruption," declared Mr. Clinton and Haitian Prime Minister Jean-Max Bellerive in Monday's New York Times. The two are co-chairs of the Interim Haiti Reconstruction Commission, which has met exactly once.

People on the ground depict a government that is overwhelmed by logistical complexities and that can't make even the most simple decisions. As New York Times reporter Deborah Sontag found, building supplies are held up in customs for weeks or months at a time - while the government earns substantial fees for storage. Underlying these problems are more intractable ones, such as land tenure. Most Haitians don't have basic property rights. Many property records either never existed or have disappeared, so it's often impossible to determine who owns homes and land. "Multiple families claim title to almost every scrap of real estate," The Associated Press reports. Permanent houses can't be built until land-title issues are resolved. So even when building materials finally get through customs, there's no land to put them on.

Meantime, ordinary Haitians perceive their government to be both invisible and corrupt. In their view, as one recent visitor reports, "the government has done nothing but buy new cars with the aid money."

None of this should come as a surprise. Haiti ranks almost last in the world in terms of rule of law and government effectiveness - just ahead of Sudan and Somalia. In the 20 years before the earthquake, it received $5-billion in aid from the U.S. alone, without noticeable effect.

Of course, as we are constantly reminded, nation-building takes time. Transforming Haiti into a functional and well-governed state is not just the job of a decade but of a generation. Yet, with persistence, money and help from outside experts, it can and must be done.

Forgive me for the bucket of cold water. But didn't they used to say that about Afghanistan?

Opinion
The biggest lesson of Haiti: We must reduce the risks of disasters before they happen
May 2, 2018 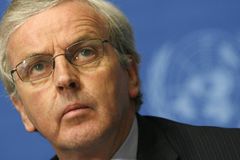 Opinion
The rehabilitation of Conrad Black
May 9, 2018