Andrew Potter's resignation as director of the McGill Institute for the Study of Canada raises questions of importance to all Canadians. For me, it also brings back powerful memories.

When terrorists attacked the World Trade Center and Pentagon on Sept. 11, 2001, I was an untenured associate professor at Duke University. My research concerned the relationship between armed conflict and international law.

I disagreed with a number of the decisions taken by President George W. Bush, including on torture and Guantanamo Bay. And I said so publicly, in broadcast and print interviews and through a series of strongly worded op-ed pieces.

During an intensely difficult, highly emotional period in U.S. history, my opinions were poorly received. A group of wealthy Duke alumni called on the president of Duke University to fire me. Instead, Nannerl Keohane stood behind me, telling the donors that Duke was a great university in large part because it valued and defended the freedom of academic expression.

As a graduate of McGill, I have long believed that it is a great university. Sadly, its senior administrators have compromised this belief.

First, they publicly stated that Mr. Potter's views did not represent the university's views. But great universities do not have views. Instead, they provide a venue – safe from prejudice and persecution – in which intellectuals, including students, can gather to develop, debate and express knowledge, insights, and opinions.

Second, by stating that Mr. Potter's views did not represent McGill's views, the administrators were implicitly criticizing him, at a time when he was already under intense public pressure to retract his column and apologize. A great university would have rushed to support his right to speak, as Duke University did for me.

Third, McGill allowed the controversy to become a resigning matter, thus turning a bad mistake into a scar on its reputation. The scar will be larger if it turns out that senior administrators pressured Mr. Potter into resigning. If they themselves succumbed to pressure from politicians or donors, the damage could be crippling.

Faculty members and students at McGill can no longer be confident that the university has their back. Will they self-censor themselves, choose uncontroversial lines of research, or move?

Faculty members and students at other Canadian universities will also be affected, albeit indirectly. This country will become, to some small degree, a less interesting and innovative place.

Freedom of academic expression is essential to scientific and social innovation. It is also a core element of democracy, since the development and testing of knowledge is the first step in speaking truth to power.

Societies that limit freedom of academic expression cannot aspire to be world leaders in the humanities, social sciences or natural sciences. In the 1930s, the great polymath Michael Polanyi travelled to the Soviet Union where he learned that all research was centrally planned.

On returning to the West, Mr. Polanyi founded the Society for Freedom in Science – based on the insight that scientists, to be truly successful, require the liberty to pursue knowledge and challenge each other without fear of cost or consequence.

His son, Nobel laureate John Polanyi, has carried on this proud legacy of science and public engagement at the University of Toronto, a great university.

Mr. Potter's column in Maclean's magazine did not constitute hate speech. His research concerns society; his role as the director of the McGill Institute for the Study of Canada was to help this country's citizens better understand themselves.

The argument that Mr. Potter only recently moved to Quebec and is therefore unqualified to comment is specious. New perspectives are often invaluable, in that they challenge old assumptions and lazy forms of group-think.

Whether you agree with Mr. Potter is beside the point. He should not have apologized. He should never have resigned.

If anyone should resign, it is Suzanne Fortier, the principal of McGill University. She needs to turn this ship around, and quickly. 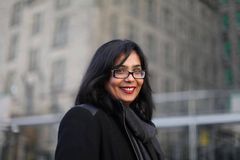 Opinion
Why campuses are ditching free speech
March 20, 2017
Under Xi Jinping, China is increasingly silencing sources of dissent
March 10, 2017
Follow us on Twitter @globedebate Opens in a new window
Report an error Editorial code of conduct
Due to technical reasons, we have temporarily removed commenting from our articles. We hope to have this fixed soon. Thank you for your patience. If you are looking to give feedback on our new site, please send it along to feedback@globeandmail.com. If you want to write a letter to the editor, please forward to letters@globeandmail.com.
Comments