This country's population is becoming heavily concentrated among the elderly. This greying is a tilt that tends to diminish energy, drive, ambition. Life in the low gear becomes the way. The aging sedan is comfortable enough. And the trend will only worsen as the giant baby boomer generation gets even older.

Our aging population isn't a problem for the governing Conservatives. Their vote is least heavily concentrated among the young. Harperland becoming Geezerland is therefore music – elevator melodies no problem! – to their ears.

The coming Throne Speech will reflect these demographics. Although there has been talk of the Conservatives hitting a reset button, don't expect bold change or a clarion call for a new frontier. It's not in the cards.

If the leaks are to be believed, this Throne Speech will be a bean-counter's delight, with vote targeting evident in every paragraph. It will feature all kinds of consumer-friendly initiatives, such as addressing excessive telecom charges. There will be support for families. There will be a sermon on how proud we should be to be Canadians – especially under this government.

The speech will have new offerings in areas such as military procurement and greenhouse gas regulation, but the Conservatives are probably right in thinking that there's no widespread demand for major change. When polled, Canadians are hard-pressed to single out one overriding issue that really has them angry.

While there are tremors to the south of us and elsewhere, there is no crisis here. The atmosphere is closer to complacency: "It's come on Canada, let's go out and paint the town beige," said pollster Frank Graves. And that suits the government just fine, he says.

It isn't just the age creep that militates against change. There's the reality that, on a comparative basis, these are relatively good times. There are serious problems: energy markets, falling middle class, collapsing manufacturing base, aboriginal peoples, deteriorating democracy and so on. There's the usual anxiety about the future. But to stand back from the daily headlines is to see a country in a rare comfort zone. Maybe only in the 1920s and 1950s were conditions comparable.

Canada's regional tensions are about as calm as they ever have been. The searing unity quarrels with Quebec, which lasted four decades, have subsided. The deep resentments from the West have abated because we have a Western-based Conservative government. Our economic condition is free from some of the worst perils of previous times – the stagflation of the 1970s, the gloom of the 1930s. Our old-fashioned resource economy is our insurance card. Few seem concerned that we are still so dependent on staples.

In terms of foreign threats, today's hardly compare to the Cold War era or the World Wars. Now, by comparison, we get paranoid if some two-bit terrorist makes a bomb in a pressure-cooker pot. While there are cultural strains, our multicultural fabric is better woven than elsewhere.

It's no small wonder, with such conditions and a population dominated by the old set, that incrementalism is still the way. Given Canada's natural abundances, many would say there is little co-relation between our relative good times and government performance. Progressives point to the roll-back-the-clock approach on the economy, on criminal justice, on the environment, on democracy.

But for the purposes of a Throne Speech, the Conservatives will be able get away with a document that doesn't seek to get the national sap rising. Progressives will despair, but Canada's ever-expanding fogey contingent won't have a problem with it. They'll be happy the country is being painted beige.

Opinion
Why did Harper up the ante on Keystone?
October 1, 2013 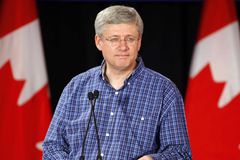