Jennifer Good is an associate professor of communication, popular culture and film at Brock University in St. Catharines, Ont.

It was 10 years ago last week that Apple CEO Steve Jobs launched the iPhone, revolutionizing personal communications for millions of people. Let's mark the anniversary by examining a theoretical communication concept known as "symbolic annihilation."

Symbolic annihilation is older than the iPhone. It was developed about 40 years ago to make sense of television's messaging power even in the absence of messages. Research was showing that the more television people consumed, the more likely they were to answer questions about the real world using the media's "reality."

But what happens when the media doesn't tell or cover certain kinds of stories? Turns out there's an effect in this situation as well: The more media people consume, the less likely they are to know about the "annihilated" topic. More on that later, but first to the iPhone.

The iPhone leaves quite a footprint. New Apple CEO Tim Cook said in his 10th anniversary message last week that the "iPhone set the standard for mobile computing in its first decade." And indeed it has. More than a billion iPhones have been sold around the world. Every step of its life cycle – from mining the metals to assembly to discarding – punishes the environment. The advocacy organization Electronics TakeBack Coalition reports that, each day, more than 416,000 mobile devices are discarded in the United States. (Keep in mind that the lifespan of a phone is the shortest of all mobile devices – and getting shorter.)

The waste being generated should be of major interest to the media and everyone else – more than a billion iPhones and counting; more than 416,000 mobile devices discarded every single day in the U.S. alone. That's a lot of waste – waste we rarely read or hear about. This is where symbolic annihilation comes in.

As part of the research I recently published in the Canadian Journal of Communication, I searched almost 300 Canadian newspapers for any mention of "iPhone" in 2007, the year it was introduced. I found 1,257 news items that mentioned "iPhone," but only 94 articles mentioning "electronic waste" or "e-waste." I checked again more recently (July 1, 2014 to July 1, 2015), when growing awareness of electronic waste had made it a bona fide global environmental justice phenomenon. The number of articles mentioning "iPhone" increased by 33 per cent, to 1,679, whereas the number of stories mentioning "electronic waste/e-waste" decreased by 69 per cent, to 29.

But here's the real kicker: In both years combined, the number of articles mentioning both "iPhone" and "electronic waste/e-waste" totalled just three.

Low-wage workers dismantling piles of electronic waste in places such as Agbogbloshie, Ghana, or Guiyu, China, will continue to take the parts with monetary value and trash the rest. The local consequences are devastating. In Guiyu, 80 per cent of children have more respiratory illnesses, higher levels of lead and cadmium contamination and lower cognitive functioning than children from surrounding areas without e-waste operations.

The news media should be informing us about the mountains of electronic waste that our society is constantly spewing out; how the environment is being compromised; and how lives are being destroyed. But it is not. And as long as this alarming issue remains out of sight, its threat will not be confronted.

Symbolic annihilation acknowledges the power the media wields when it doesn't cover a story. When we are denied information about a reality we do not experience firsthand, that reality is annihilated.

"We are just getting started," Mr. Cook gushed last week. "The best is yet to come."

Given what we're told – or rather, not told – about the consequences of our ravenous consumption of the iPhone, why would we have any reason to doubt him?

Opinion
Your new iPhone will soon be trash, and that's the point
September 8, 2016 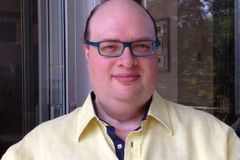 Opinion
I’m an analog girl in a digital world
January 7, 2017