There was a significant shift in Israeli politics this week – not one you'll read about on the front pages of newspapers, but one that could have profound effect both on future governments and on the future of the Arab-Israeli peace process.

Less than a week after being restored as the sole leader of Shas, the political party supported by many of Israel's ultra-Orthodox Sephardi Jews, Aryeh Deri changed the party's political course. In a letter to Israeli Prime Minister Benjamin Netanyahu, Shas called on the government to adopt the far-reaching Arab Peace Initiative, a recently revived 2002 proposal that calls on Israel to withdraw from all Arab lands occupied in 1967 in exchange for full recognition by all Arab states.

The initiative "contains the seeds to begin building a bridge of understanding between Islam and Judaism," wrote Yitzhak Cohen, a long-time Shas cabinet minister, who would have written the prime minister only with Mr. Deri's approval.

Such a letter would never have been issued under the leadership of Eli Yishai who, in the past 13 years, took a tack to the far right, and allied Shas with the Israeli settlers' camp.

But Mr. Deri, who founded the populist religious party in 1984 and led it until 1999, was always pragmatic, sitting in governments led by both Likud and Labour. Indeed, some would say it was Mr. Deri's political flexibility that landed him in prison in 1999, convicted of breach of trust and taking bribes of $155,000 as Interior Minister.

After 22 months in jail and a few years in political purgatory, Mr. Deri announced last fall that he wanted to return. Always a darling of Shas's spiritual leader Rabbi Ovadia Yusef, Mr. Deri soon got the nod to take the helm of Israel's fifth-largest party, the second biggest in the opposition. And the party's Torah Sages blessed the move last weekend.

Intriguingly, support for the Arab initiative could lead this Jewish religious party back into government.

Should Mr. Netanyahu agree to enter negotiations with the Palestinians based on the U.S.-backed proposal, which calls for Israel to withdraw from many of its West Bank settlements, he can be sure that some of those in his right-leaning coalition will bolt from the government.

Parties such as Jewish Home, led by Naftali Bennett, with 12 seats in the coalition, and Yisraeli Beitenu, led by Avigdor Lieberman, with 11 seats, are the most sympathetic to the settlement cause. Even some of Mr. Netanyahu's own Likud Party members have moved to the right of their leader and might break from the party over this issue.

That's where Shas and its 11 seats in parliament come in. Already, Labour Party leader Shelly Yachimovich said her 15 MPs might join the coalition should members on the right desert the government. Now, with the prospect of Shas's 11 seats also helping shore up a coalition for peace, a very different government could take shape.

It is a situation similar to that faced by then-prime minister Ariel Sharon in 2005, when he faced a mutiny inside Likud over his decision to withdraw all Israelis from Gaza. Mr. Sharon formed a new party of like-minded people, Kadima, that held power and went on to win the next election, and Gaza was left to the Palestinians.

For Mr. Deri, the prize is all about furthering the best interests of his religious Sephardi community.

At the moment, the Netanyahu government is pursuing a policy that would force ultra-Orthodox Israeli men to perform military service. Until now, most have been exempt because they are students in religious schools. Breaking that system is a notion made popular by Mr. Netanyahu's new coalition partner, Yair Lapid, whose party won 19 seats in the recent election.

Just this week, a Knesset committee recommended that exemptions be limited annually to 1800 of the best religious scholars, and that any other young men who avoid the draft will be treated as criminals and jailed.

Mr. Deri is no extremist on this issue. He has said that a fair share of his community should serve in the army, but his presence in the government might smooth the edges of the controversial new policy.

Amnon Dankner, the late, former editor of the Maariv newspaper, said last year that he could imagine Mr. Deri and Mr. Lapid, two seemingly political enemies, serving effectively in government together. The pragmatist in both men, and their popular appeal, Mr. Dankner said, will lead them to a compromise on this divisive issue that the whole country can accept.

Just what kind of politician is Aryeh Deri?

A man of surprises, I'd say.

During the 1992 election campaign, for example, I found the Shas leader, then Minister of the Interior in the Shamir government, campaigning in the Arab Israeli community of Umm al Fahm, a hotbed of rigid Islam in the Galilee area.

At that time, Raed Salah, leader of the northern Islamic movement was mayor of the Arab city, and no other Zionist politicians bothered to campaign there.

But Mr. Deri drew a crowd of more than 200 curious community leaders one evening. He told them that he knew exactly what they were going through – being ignored by Israel's ruling establishment while their community's infrastructure, health and education facilities withered away.

He knew, he said, because he, as a Jew born in Morocco, had suffered the same way a decade or so earlier at the hands of the European Jewish leadership looked down their noses at Sephardi Jews.

The Arab crowd ate it up and a surprising number of people in Umm al Fahm even cast ballots for the deeply religious Jew and consummate politician.

Opinion
With its Syria plan in tatters, Turkey needs a strategy reboot
May 9, 2013 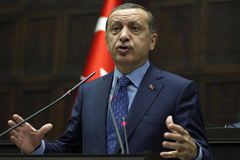