Erna Paris's most recent book is From Tolerance to Tyranny: A Cautionary Tale from Fifteenth-Century Spain.

A frail, anxious-looking man of 93 sits in a German courtroom – minus his SS uniform. Oskar Groening is charged with complicity in the murder of 300,000 Jews in the Auschwitz death camp during the spring of 1942. His specific job was to rifle through the belongings of new arrivals to confiscate their money (they wouldn't need it any longer, he later explained). And, and as one of the few Nazis still alive, his trial may be the last from that murderous era.

Until recently, the transformation of the German judiciary was dubious and slow where it concerned the Holocaust. Approximately 6,500 SS members operated in the Auschwitz camp, of whom only 50 have been convicted of war crimes. But in 2011, an historic change occurred: A Munich court sentenced the Ukrainian-American, John Demjanjuk, for complicity in the murders of 28,000 Jews in the Sobibor concentration camp, where he had been a guard. The "complicity" charge was new. Prior to 2011, German prosecutors had dropped countless cases for lack of evidence directly linking the accused to specific criminal acts. This time the court decided Germany's legal system had viewed complicity too narrowly. The Demjanjuk conviction effectively described the mass murders in Sobibor as a single process that implicated everyone working in the camp.

The idea that a group can be designated as criminal was not entirely new. Back in 1946, the Nuremberg Tribunal had declared the SS to be a criminal organization. The concept of aiding and abetting also has a pedigree under national legal jurisdictions and in international law. For example, in 1998 Maurice Papon, the Vichy civil servant responsible for "Jewish Questions" in the occupied Bordeaux region was convicted of "complicity in crimes against humanity" for knowingly sending Jews to the Auschwitz transit camp at Drancy. The Papon trial was divisive and long. Notably, public debate centred on how to determine the responsibility of an individual who was a link in the chain of genocide, not someone who had physically perpetrated a war crime.

For the past two decades, the UN ad hoc international criminal tribunals and the ICC have been incrementally refining the meaning of complicity in major crimes, including the degree of active participation, including non-violent participation, in a criminal enterprise. The German court will have to decide whether the charges against Oskar Groening meet the criteria broadly known as "contribution" or "aiding and abetting." He has openly admitted witnessing the gassing of prisoners whose possessions he had earlier stolen.

Given the evolution of the law, not least in Germany, it's hard to imagine an acquittal. He has acknowledged having been briefed by the SS about his "difficult" posting to Auschwitz. He was told the camp was central to Hitler's plan to exterminate the Jews. And he went there freely, proud to serve. An acquittal would reverse Germany's renewed attempts to try Holocaust-related cases before the last of the perpetrators dies. It would suggest a return to the problematic ways of old. This would be complicated. More than seven decades later, Germans remain haunted by the 12 years that fractured their society and bifurcated the 20th century.

Conversely, a conviction would reaffirm that there is no statute of limitations for crimes against humanity, and that accountability remains possible. For example, there are now optimistic signs in Bosnia, where 10 former Bosnian-Serb soldiers were recently indicted for war crimes committed in 1993. Remarkably, given the history of that conflict, it was co-operation with Serbian prosecutors that made this possible.

Oskar Groening is neither insensitive nor dishonest. Years ago he refuted the Holocaust-deniers. He has expressed shock at the atrocities he witnessed in the Auschwitz camp. He has requested forgiveness for his "moral complicity." Perhaps he has compared his untroubled postwar life to the murders of millions in his former workplace.

Perhaps he would welcome the justice of a conviction.

In that he would resemble the few elderly men and women who survived the Auschwitz hell and have travelled to the Lunenburg courtroom; or the adult children who have come in the name of traumatized parents who did not live long enough to see – to hope for – a small measure of justice in the closing days of their lives. 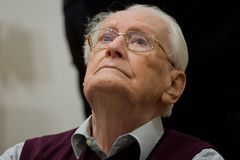