Alex Usher is the president of Higher Education Strategy Associates.

For the past couple of years, one of the things that both the Canadian right and left have agreed on is that the transmission belt from higher education to the labour market is broken. For the right, this has been expressed in terms of "skills gaps" (or, when that proved a stretch, "skills mismatches"), which is code for "we need fewer BAs and more college grads." For the left, the discussion has turned on the theme of a "lost" or "squeezed" generation that is highly skilled but is having its transition to the labour market blocked by government austerity, temporary foreign workers, etc.

Uniting these narratives was not just a belief that this state of affairs was a "new normal" that required massive institutional change, but also a near-total reliance on anecdote rather than data. But on Friday, some data showed up. Very quietly, Statistics Canada released the first data from the new National Graduates' Survey. To put it mildly, this new data blows both of those narratives out of the water.

The NGS is designed to report on the fate of graduates two years after graduation. What was released last week was the 2012 employment and income situation of students who graduated in 2010. It's particularly instructive to compare this data with the survey's 2005-07 data, since one was conducted in the midst of a boom and the other in the midst of what feels like a never-ending period of stagnation.

And what do we find when we make these comparisons? Well, first, among graduates who did not pursue further educational credentials (that is, who went into the workforce), employment rates for both bachelor's and college grads in 2012 were exactly the same as they were in 2007.

Remarkably, from the height of the boom to the middle of the current "recession," there's essentially no difference either in terms of overall employment or in terms of full-time employment. To the extent that there are people struggling and having a hard time finding a job, it's business as usual: the proportion has not changed since the height of the boom (for both college and university grads, the unemployment rate in both periods was 5 per cent, with another 5 per cent not in the labour force). 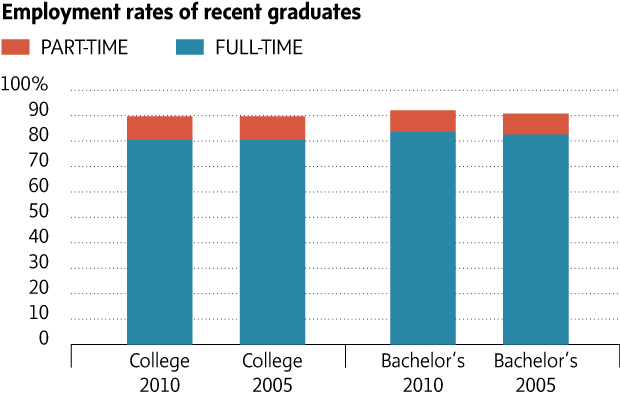 Turning to the question of income, one might reasonably expect that the recession has had a negative effect on salaries for early-career graduates. But here again, one would be wrong. Adjusted for inflation, there’s been a rise in median salaries of 7 per cent for bachelor’s graduates and 8 per cent for college graduates (see attached graph).
There is of course some variation across the country in terms of post-graduation salaries, but these, too, don’t always line up with expectations. According to the NGS, Newfoundland now pumps out the country’s best-off college and university graduates, with bachelor’s graduates earning $67,000 two years after graduation and college graduates earning $52,000. 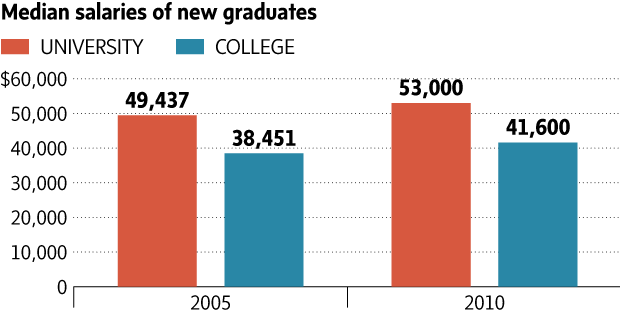 At a minimum, what the foregoing proves is that the idea that there are vast numbers of un- or under-employed graduates wandering the streets looking for work is simply fiction. But the full picture isn’t necessarily as rosy as it sounds. And that’s because the figures above are only part of the picture: they exclude students who have gone back to school for another credential. 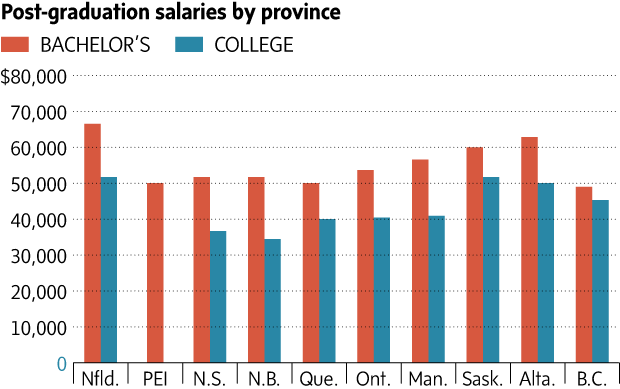 Even in the best of times, large numbers of graduates go back to school to get an extra credential. Among college students, between 30 and 40 per cent usually go on to another credential within two years of graduating (mainly at the undergraduate level); among Bachelor’s graduates, it’s 40 to 50 per cent. Statscan excludes these students when reporting to avoid complication and confusion. But to the extent that the proportion of graduates returning to school varies from one survey to another, there’s the possibility that the employment and income numbers only look good because a significant number of students are avoiding the labour market.

As it turns out, there was such a spike in 2012. Compared to 2007, college and bachelor’s grads’ continuation rates rose by 6 to 7 percentage points. Why this happened, we don’t know. It could be a response to long-term labour market changes which requires new workers to get ever-higher levels of skills, but it’s also consistent with students trying to avoid a nasty labour market. The last time the returning-to-school numbers were this high (49 per cent among university grads, 38 per cent for college) was during the 1990 recession.

If one were really trying hard, one might try to jam that fact into a “lost generation” narrative, but there’s a big difference between being in grad school and being underemployed. By getting extra credentials, graduates are setting themselves up or even greater returns down the road (the NGS confirms that grad-school outcomes aren't getting worse, either). As for the “skills mismatch” narrative which suggests that we’re putting too many people in university and not enough in college, there’s not a shred of evidence. The trends in the data – both the positive and not-so-positive – are exactly the same in both colleges and universities, which suggests a rough balance between the two where labour-market outcomes are concerned.

None of this is to say that it isn’t rough for grads looking to get established in the labour market these days. It’s just to say that it’s always this rough and that there’s nothing particularly special about the period we’re going through. The system’s working pretty much as it’s supposed to.