"I can tell you one thing for sure," Donald Trump said Tuesday before departing for his estate at Mar-a-Lago, "we don't need a liberal person in there, a Democrat…"

Mr. Trump, the President of the United States, was of course speaking about the upcoming Senate election in Alabama between Democrat Doug Jones and Republican nominee Roy Moore, who has come under fire recently for allegations of sexual misconduct with underage girls. While most prominent Republicans have distanced themselves from Mr. Moore, the Trump administration has tap danced around the scandal in recent days before the President voiced ambiguous, yet pointed, support for the embattled candidate.

For citizens, and every exhausted person watching the political process from afar, that Mr. Trump once again did the wrong thing is in no way surprising. Throughout the first year of his presidency and the entirety of his campaign, Mr. Trump has shown an otherworldly ability to be on the wrong side of every significant issue. Now, with record-low approval ratings and a track record of bad judgment, it's time for Americans to realize the stark, cold truth: our president embodies the most pressing ills of our nation.

With the recent outpouring of allegations of sexual misconduct by men of power around the country, we should remember that Mr. Trump himself, in the days leading up to the 2016 presidential election, was accused by no less than 16 women of impropriety. In his interviews and public appearances, Mr. Trump has shown time and again a deep disrespect for women, and seems stuck in a patriarchal past that is both crumbling by the day while still maintaining a desperate stranglehold on our culture.

As well, Mr. Trump's constant fixation on material possessions and his life's work of amassing wealth for no other purpose than the amassment itself, is indicative of two of America's most pressing issues: the widening wealth gap between the haves and have-nots, and unrestrained greed. In the interests of both, Trump's Republican Party is currently pushing legislation to grant a tax cut for wealthy Americans that will simultaneously punish the middle and working classes – a bill that, on the surface, seems to have no other purpose than to further enrich the wealthy and punish the poor.

When pressed about the rise of radical far-right white supremacists in the wake of a tragic death in Charlottesville, Va., Mr. Trump stopped short of criticizing the neo-Nazis responsible and praised the "very fine people on both sides."

One petulant interview or tweet at a time, Mr. Trump has criticized minorities and presented a consistently racist worldview. His targets have included athletes including Colin Kaepernick and Marshawn Lynch, as well as the NBA and NFL.

When addressing the humanitarian crisis following Hurricane Maria in Puerto Rico, Trump continually lambasted the suffering people, including a tweeted criticism that "they want everything to be done for them."

In his role as chief executive, Trump has openly lamented the restraints on his power that were put in place as checks and balances by the founding fathers themselves.

Examining Trump's record, there's an undeniable pattern of behaviour that, when the dots are connected, reveal a truly troubling philosophy at play. The truth of the matter is that Mr. Trump personifies a backward worldview that prevents America from moving forward and realizing its potential. His actions are regularly misogynistic, racist, ignorant and authoritarian. On issues that are black and white – both in terms of ethics and public opinion – including freedom of expression, freedom of the press and the removal of Confederate statues, he stands firmly on the side of the wrong and vocal minority.

In the instance of Roy Moore, it should serve as no surprise where Donald Trump stands, considering he laid the groundwork for this embarrassment of a campaign. In 2016, Mr. Trump led the Republican Party down a dark and twisted road that prepared them for this shameful candidate, and it was the same partisanship and tribalism that eventually allowed Trump's election that led us to our current deteriorating situation, wherein a major political party is defending an alleged sexual predator lest it lose its stranglehold on the levers of power.

Many Americans over the past few disgraceful months have wondered how our country could have fallen so far, but they're clearly missing the point. For years now, the United States has suffered the maladies of racism, sexism, unchecked capitalism and tribalism, but we've been in blissful denial of their existence and have, at times, presumed we'd moved past their influence.

With the election of Donald Trump, we've installed a constant reminder of the dark underbelly of American culture, and it's unlikely he'll let us forget. 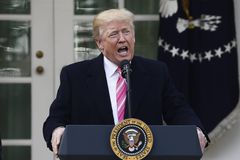 Trump not campaigning for Roy Moore due to ‘discomfort’ over allegations: aides
November 19, 2017 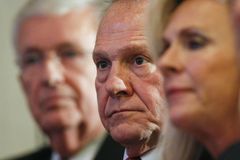