Not since the War Measures Act in October, 1970, has a quiet, little place called Ottawa been so utterly transformed.

This morning, the usual sleepy normalcy of the capital was shattered by gunfire, deaths, a manhunt, and a total lockdown of Parliament Hill.

An attacker hit the War Memorial, where a soldier was shot. This first assault was followed by further attacks inside the nearby Parliament itself, where many shots were exchanged between a gunman (or gunmen) and security personnel.

Shortly thereafter, the Canadian military arrived: soldiers, military vehicles and a special forces team used only for the most serious threats to security. They cordoned off the entire parliamentary precinct. Office buildings in central Ottawa were put on full security alert, with people prevented from entering or leaving.

What began as a lockdown of Parliament Hill spread throughout more of the downtown area, as police and military searched for possible other assailants.

The attacker (or attackers), consciously or otherwise, struck with the Parliament Buildings full of political leaders. Wednesday morning is when the political parties hold their weekly caucus meetings, so most MPs were at hand. Later in the day, by coincidence or irony, the government was to introduce new legislation tightening Canada's anti-terror laws following the recent attack on two Canadian military personnel in Quebec earlier this week.

Within Parliament, MPs and aides gathering for their caucus meeting scrambled to hide themselves from the assailants. Prime Minister Stephen Harper, who was reportedly working in his office in the Centre Block, was apparently spirited away from the scene, likely through tunnels that run underneath the lawns of Parliament. Those tunnels, built during the war, are little used but they obviously came in handy today.

Parliament Hill in recent years has experienced heightened security, but obviously not enough to prevent today's attack. Following the terrorist attacks in New York City on 9/11, all unauthorized vehicles were prohibited from being on Parliament Hill. Any person without a pass was (and is) required to pass through the kind of screening used in airports in order to enter the Parliament building. Inside Parliament, there are dozens of security officials to whom passes must be periodically shown.

Despite these arrangements, somehow one assailant or more got inside Parliament, apparently carrying a shotgun, fired it many times and caused generalized chaos inside the building. Afterwards, central Ottawa was still locked down, as the military and police scoured the area looking for other attackers that were reported to have been part of the assault.

So will questions be asked of intelligence agencies, such as the Canadian Security and Intelligence Service, as to whether they had any indication, however vague, about the possibility of a terrorist attack. Last week, NBC News in the United States reported rumours of possible public terrorist activities being planned in Canada. These reports were dismissed in Canada. It turns out that at least some of what NBC reported might well have been accurate. 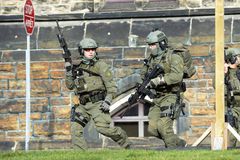 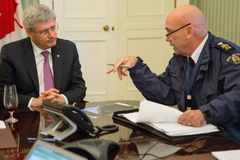