Like millions of other people, I'm not a big fan of Hillary Clinton. No matter how hard a worker or great a grandma she may be, God has not blessed her with the ability to project charm, or wit, or warmth. On that score she compares poorly with Barack Obama. Her efforts at soaring rhetoric usually come off as banal and trite, and her policy ideas are standard left-wing boilerplate.

It wasn't a great speech – I'm not sure she's capable of that. But it was serviceable, and competently delivered, with energy and conviction. Ms. Clinton did not try to pretend she's something she is not. She proudly celebrated what she is – a wonk, a grinder and a woman.

FOR SUBSCRIBERS: Ibbitson: Clinton frames race against Trump as fear vs. belief in the future

Her best moments came when she skewered Donald Trump. She found just the right tone – sly, dismissive, mocking, not too heavy-handed, not too shrill. Women can't afford to be shrill.

"A man you can bait with a tweet is not a man we can trust with nuclear weapons," she said. It was the best line of the night.

Ms. Clinton also made a convincing case for herself as commander-in-chief – not easy for a woman. On national security issues she managed to look cool, tough, measured, competent. It's her opponent – the burlesque alpha male – who's hysterical and shrill. Nice gender reversal there.

FACT-CHECKING: Clinton's big speech and Trump's swipes from the sidelines

I liked the way she explained what drives her. She's a good Methodist girl from the Midwest. Methodists were taught to "do all the good you can … as long as ever you can." I know many people like that. They are hard-working incrementalists. They're not out to transform the world. They just want to make it better. And they do.

I've always thought that Hillary's masculine side is far more appealing than her feminine side. Analysis, not empathy, is her strong suit. America doesn't really need a social worker-in-chief. Yet she is determined to be that, too. The weakest parts of her speech were the usual promises of miracle cures for whatever ails the land – jobs and higher wages for all, and justice for the disadvantaged, which includes every niche group except for rich white men. She even reached out to Trump Nation. "We are the party of working people, but we haven't done a good enough job showing we get what you're going through," she insisted.

In fact, the Democrats are no longer the party of the white working class. They're the party of minority groups and the educated professional elites. The old industrial economy is gone, and the world has changed much faster than liberal welfare nation-states can react. That helps explain Donald Trump.

IN PHOTOS: Images from the closing day at the Democratic Convention

Ms. Clinton is trying to pull off something quite tricky here. She wants to contrast her sunny vision of America with Mr. Trump's dark, dystopian one. "America is great because America is good," she proclaimed. She's just going to move it forward a bit to make it better. Her problem is that she's running as the candidate of continuity in an age of radical disruption. The most frightening statistic in this election is that nearly 70 per cent of Americans think their country is on the wrong track.

For cynics, Ms. Clinton offered up several groan-worthy moments. She is simply not credible as the populist anti-Wall Street candidate, or as the crusader against big money in politics, or as the basher of the one per cent. Her daughter Chelsea, who testified to her mother's social-justice credentials, is married to a New York hedge-fund manager – just the kind of evil moneyed interest that Hillary denounces. Her entire campaign is fuelled by the one per cent.

She should also stop giggling at her own jokes. Gravitas suits her. Giggling does not.

To the extent that conventions matter any more, the Democrats had a triumphant week. It was a great show. The speeches were terrific. The voice of Morgan Freeman was amazing. Hillary even got a heartfelt embrace from Barack Obama, who's miles more popular than either of the candidates. If he were running, he'd win hands down.

Hillary Clinton is no Barack Obama. But this week she showed she's good enough, and then some. The race for the presidency is a cruel and prolonged trial by ordeal that few can survive. She has.

Opinion
All that stands between us and the abyss is – help us – Hillary Clinton
July 9, 2016

The end is nigh: Donald Trump, and other signs of the apocalypse
July 24, 2016 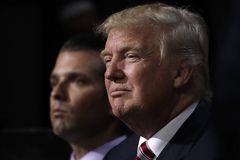