We can all remember the school fire drills we took part in as children. We would be instructed to line up and leave the building in an orderly manner. When we got outside, the teacher would take attendance to ensure that everyone had made it to the designated meeting place. As a teacher, I remember leading my first class down the stairwell, past the firefighter who had come to observe the drill, and out to the field. Fire drills were seen as one of those things that were required, but would probably never be "real."

In comparison, lockdown drills are relatively new. The Toronto District School Board, the largest board in Canada, first adopted an operational procedure in 2005 and revised it in 2008 and 2009. By this time, my job was more administrative and I attended meetings at which experts explained why window shades should be drawn, lights should be turned off, and teachers should not call the office in the event of a lockdown. The instruction to "lie on the floor if gunshots are heard" seemed self-evident but unlikely to be needed.

The language about these types of operational procedures refers to "threats" and "known dangerous offenders," so even as my son started to practise these drills in kindergarten, the likelihood that it would ever be "real" seemed remote. After the events in Saskatchewan and Ontario over the past month, the likelihood seems less remote.

First, there was the shooting at La Loche Community School in northern Saskatchewan. The two staff members killed at the school, Adam Wood and Marie Janvier, were only 35 and 21, respectively. They were just starting their careers when their lives were ended. The accused is a 17-year-old male student, facing multiple charges in the attacks at the school and a home in the community that, in all, left four people dead and seven injured.

On Wednesday, a 14-year-old female student was charged with several counts of assault after allegedly stabbing five students and two staff members at Dunbarton High School in Pickering, just east of Toronto. News reports indicate that she may have written about her intentions on social media in advance.

That these two events happened in Canada, and one so close to home, is one part of why they affected me more than some others in the past. Another reason is that the accused in both cases are young and part of their community. They are not the anonymous strangers I imagined as I was being trained in operational procedures. The teachers that huddled in dark classrooms with my son and his classmates may not have envisioned that the "threat" would be from one of their own.

Recently, a column in The Globe and Mail explored Sue Klebold's memoir about coming to terms with what her son, one of the Columbine High School killers, had been capable of doing as a 17-year-old. Leah McLaren wrote, "The ultimate message of the book is actually quite terrifying. As psychologist Andrew Solomon writes in his introduction: 'You may not know your own children, and, worst yet, your children may be unknowable to you.'"

As a citizen, educator and parent, these events and the message of Ms. Klebold's book have left me with immeasurable sadness and unanswered questions. What can we as a society do to help everyone in these situations? What can schools and teachers do, beyond writing and practising operational procedures about varying degrees of "threat"? What are we really hoping as we send our children to school each morning? 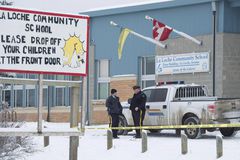