Bernie Farber is executive director of the Mosaic Institute; David MacDonald is a professor of political science at the University of Guelph; Joseph Boyden is a Canadian award-winning author and indigenous activist.

Canada officially recognizes five genocides; it's now time to add a sixth to that list.

Mr. Ouellete worked closely with Maeengan Linklater, a Winnipeg indigenous community volunteer and poet, to make the bill a reality. Both men are intergenerational survivors of Indian residential schools; the system affected their families and all indigenous communities in profound ways that we are only now beginning to understand.

The timing was impeccable. With the tragic story of Chanie Wenjack's flight from a residential school and his sad end for simply trying to go home currently in the public eye, the seeds of memory can now grow.

A 62-year-old Chanie Wenjack would probably approve of the bill, but he did not survive the Cecilia Jeffrey school and is one of its many, and now most famous, casualties.

Fifty years ago, 12-year-old Chanie, who was trying to flee a life of loneliness, cruelty and racism, was buried after suffering from exposure and hunger. His life and death are commemorated in Gord Downie and Jeff Lemire's graphic work The Secret Path and Joseph Boyden's Wenjack. It tells not only Chanie's story, but the stories of up to 6,000 other indigenous children who died in residential schools. Some believe that number could even be as high as 30,000.

These boys and girls have yet to have their voices heard and it is time to formally acknowledge them.

The Truth and Reconciliation Commission could not have found Canada guilty of genocide as defined by the United Nations. It went against its founding mandate, so the members did the next best thing – they presented a strong case for cultural genocide. This academic term has received widespread support. Sadly, according to a recent Environics poll, fewer than 4 per cent of Canadians even know about the cultural genocide finding.

While Senator Murray Sinclair, who was chair of the Truth and Reconciliation Commission, personally expressed the view that the IRS system was genocidal, he noted that it was not the role of a commission or a museum to make such a conclusion. However, Parliament does have the power to make this acknowledgment, and the government must take the lead.

For those who say such bills are in poor taste as we approach Canada's 150th birthday, we see this as the perfect time. Maturing as a country means learning about and taking responsibility for the past and continued legacies of colonization. Maturity means recognizing genocide and integrating this as part of how we understand our country and its responsibilities.

Countries such as Germany, which recognize their history with genocide and make it part of how the country understands its responsibilities to its own people and to the world, set a far more positive example than those who continue to deny.

Failing to acknowledge the past and take responsibility for it stunts the growth of any country, allowing inequalities and injustices to fester. This time around, let's be clear that what Canada did to indigenous peoples in this country, and in the course of building this country, is genocide.

Every year, Mexico celebrates the Dia de los Muertos, setting aside Nov. 1 to remember those children who died before being able to experience the pleasures and pain of growing up. The pealing of church bells in the early morning encourages the souls of angelitos, the little angels of the departed children, to visit their families.

Now, it's our turn. The plaintive cries emanating from the unmarked graves of thousands of residential-school victims demand no less.

Liberals try to fend off criticism over First Nations child welfare, vow talks
October 27, 2016
Top court to rule on fate of personal accounts of residential schools
October 27, 2016
How Gord Downie got on the trail to Secret Path
October 22, 2016 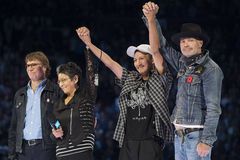