Mother Nature is terrifying these days. Hurricanes. Floods. Fires. Earthquakes. Miami is under water, and Caribbean islands have been razed. The TV news looks like a trailer for the Apocalypse.

We used to know what caused these things. The gods were angry. Humankind had gone astray, and must be punished. Natural disasters were the gods' (or God's) idea of a wake-up call.

Today, we know that's superstitious bunk. Now we know these things were caused by climate change. "After Harvey and Irma, when will Trump stop denying climate change?" asked Vogue (yes, Vogue), along with many others. Commentators warned that we'd better get used to it – this cascade of natural disasters is the new normal.

Climate change is among the biggest fault lines of the culture wars. So it's no surprise that both the left and right are playing politics with hurricanes. Last week, the right-wing blowhard Rush Limbaugh accused the weather scientists of exaggerating Irma's dangers for political ends – just before he fled his lavish Palm Beach digs to seek refuge from the storm. Commentators took the opportunity to remind us that the Trump administration has loaded up on climate-change deniers. The Environmental Protection Agency, once a hotbed of climate activism, has exiled the climate scientists to Outer Siberia.

It's hard to know who's been worse on climate policy – the Republicans, who think global warming is a left-wing conspiracy, or the Democrats, who believe the Paris Accord will actually achieve something. I'm not surprised that Americans are so suspicious of their leaders. On this, as on so many other matters, neither side deserves their trust.

So when you strip aside the politics, what do you have left? Actually, we have no idea if these storms were caused by climate change. As The Globe and Mail's science reporter, Ivan Semeniuk, explained the other day, "[G]lobal climate models … are generally not able to say much that is definitive about hurricanes." In the future, climate change may well result in increased rainfall from hurricanes and more serious storm surges. But for now, according to the National Oceanic and Atmospheric Administration, "it is premature to conclude that human activities – and particularly greenhouse gas emissions that cause global warming – have already had a detectable impact on Atlantic hurricane or global tropical cyclone activity."

And if this is the new normal, it's not that different from the old normal. Earthquakes in Mexico are not surprising. Before Harvey struck, the U.S. had not been hit by a major hurricane (Category 3 or higher) in 12 years. Irma and Harvey were monsters. But, according to hurricane expert Philip Klotzbach, they rank no more than No. 7 and 18, respectively, among major hurricanes to hit the continental United States.

The bills for Harvey and Irma will be colossal. But weather-related disaster losses (as a proportion of GDP) have fallen since 1990. Forest fires, as the political scientist Bjorn Lomborg points out, were far more destructive 90 years ago. In the United States, the risk of death from hurricanes has dropped dramatically because of better forecasting, better preparedness and better building techniques.

In fact, it doesn't really matter what Donald Trump or Mr. Limbaugh, or Naomi Klein or Vogue think about climate change. Climate-change policies are not going to prevent hurricanes from blowing or storms from surging. The most important thing to do is take steps to minimize the damage.

We've come a long way. The Galveston hurricane of 1900 – the deadliest in U.S. history – killed between 6,000 and 12,000 people. What's striking about Irma and Harvey is the comparatively low loss of life – about 60 in Texas, six (so far) in Florida. Irma killed another 34 people in the Caribbean. But Houston is already getting back to semi-normal. In Florida, there were few dramatic rescues or human tragedies to record. Instead, reporters showed us heartwarming pictures of people rescuing stranded dogs and beached dolphins. As the storm moved upstate and grew weaker, a CNN reporter out braving the elements was upstaged by a couple of joggers in shorts.

None of this means Mr. Limbaugh was right. Irma might well have been much worse. Climate change is real, and demands a sensible response. The only way for that to happen is to take the politics out of it. If you have any ideas for doing that, please let me know. 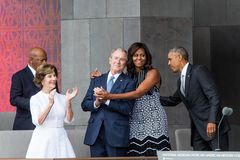 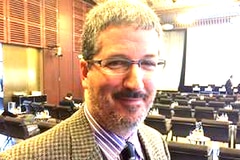