As Toronto welcomed an estimated 2 million people to WorldPride festivities last week, Premier Kathleen Wynne was a prominent presence. She attended the parade, participated in the annual 5K run, and presided over the opening ceremonies.

Toronto Mayor Rob Ford, on leave to address substance issues, was absent. But of course, it is not only at times of personal crisis that the mayor skips Pride. When the gay and lesbian community in his city gathers to celebrate, Ford would rather be anywhere else.

Out-of-town visitors to Toronto's Pride festivities might wonder: How could the city that gave the world Rob Ford have also contributed 20 of its 22 seats to the election of Kathleen Wynne, the province's first female premier and the first openly gay head of government in the Commonwealth?

First, it's worth establishing that Wynne's victory is indeed historic. She leads a jurisdiction of 13.5-million people, about 40 times the size of Iceland, which elected the world's first openly gay head of government in 2009.

As Ms. Wynne herself noted, it was not only the election outcome that was significant, but the campaign itself. Kathleen Wynne's opponents did not mention her sexual orientation — not directly, not with a whisper or a wink. The media remarked on it only after her victory, and then almost apologetically, as though it were politically incorrect even to note the milestone. To observers of social change, this silence was striking.

It's plausible to imagine that Ms. Wynne's opponents never considered attacking her personal life. Such attacks would have been certain to backfire with undecided voters, and even the conservative base in Ontario is more worried about the budget than the bedroom. (Any Canadian politician musing about deploying homophobia in a campaign is also likely to remember the headwinds Wildrose leader Danielle Smith faced after refusing to distance herself from homophobic candidate Allan "lake of fire" Hunsperger.)

So where do Rob Ford and his eponymous "Nation" stand in all this? Like other parts of North America and Western Europe, Canada has its backlash, of which Mr. Ford is our most outrageous exponent. The backlash is against the collection of social and political changes that unfolded over the latter half of the 20th century.

Different people object to subsets of these changes for different reasons. Some have sound evidence and reasoned arguments. Others feel a more diffuse sense of frustration, and support candidates who embody that anger.

Overall, however, surveys indicate that most Canadians feel good about the trajectory their society has been travelling over the past couple of generations. Canadian attitudes on many social issues, including same-sex relationships, are becoming more accepting, not less so.

Canadians also believe in government. When the Environics Institute asked Canadians in 2011 which of the following two statements was closest to their own view, 68 per cent chose "Governments are essential to finding solutions to the important problems facing the country," while 27 per cent chose "Governments are more often than not the cause of important problems facing the country."

Canadians have little appetite for major new public investments at the moment, doubting they can afford them. But neither do they want to dismantle the government they do have; they think it works and are willing to pay for it. Three-quarters of Canadians (75 per cent) believe that taxes are, on balance, a good thing.

On all these questions, opinion in Ontario is in line with the national average.

So when Kathleen Wynne faced the country's most populous city and province and made the case for the status quo on the size and role of government, situating her party in the "activist centre," voters responded — and this despite voter fatigue with her party, in power for over a decade and dogged by corruption scandals.

As Canada celebrates its 147th birthday, it has a right-leaning federal government and an attention-grabbing populist leading its largest city. But its political centre of gravity has not shifted rightward. If Ontario voters think government is the problem and greater acceptance of social diversity is a bad thing, they have a strange way of showing it. 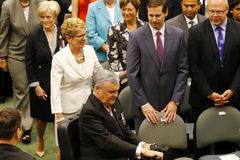