When I was 12, I wrote a paper for extra credit in class. I got to choose the subject, and being an animal lover, I wrote about the loss of wildlife in our world. It was supposed to be five pages, but I wrote 50 and learned a lot about the fragile state of our environment.

While doing Cheers, Ted Danson asked me to fill in at a press conference he couldn't make for his American Oceans Campaign. The subject was drift netting, and the reality of what these giant nets do while in use, as well as what they do after they're cut loose, was shocking.

In the late eighties, I wrote and performed a play in Los Angeles. One of the characters is deeply concerned about man's assault on nature. The other characters heckle him, but allow one minute for him to express his point of view concerning global warming. All that chilling information included in the monologue was readily available in 1987, and the predictions of melting polar ice caps, rising temperatures and sea levels, violent weather, hurricanes, typhoons etc. are coming true today.

In 1993, I read an alarming article tucked deep in the Los Angeles Times about a bill flying through U.S. Congress that would allow six million acres of Montana wilderness to be opened up to various extractive industries (oil, mining, timber and so on) to be used as they wished. I was incensed. My country's government has long proven itself to be a bunch of businessmen working for bigger businessmen, with the welfare of the people a quaint but illusory notion.

I got hold of a friend, Peter Bahouth, who worked for Greenpeace, and along with Carole King, Bob Weir and others, we managed to win a small concession from Congress that lowered the threatened acreage by 20 per cent. This was unacceptable to Republicans. It's amazing how politicians have hijacked and bastardized the word "conservative."

Anyway, this led me to my life's true passion. There are a lot of other extremely important issues – the tar sands, for instance – but mine is saving forest.

Undisturbed forests absorb nearly a fifth of the carbon dioxide released by burning fossil fuels, yet three billion to six billion trees are cut down each year around the world. Much of this goes into paper that gets used once and discarded. The Sunday New York Times requires the lives of approximately 63,000 trees. Seven of the 10 largest intact forest ecosystems left in the world are here in North America, but all forests are under siege, including the animals and birds they are home to.

In 1996, I climbed San Francisco's Golden Gate Bridge to protest against the logging of ancient redwoods in northern California, but ultimately came to realize that protests and high-profile actions do nothing to stop what the timber companies do. Even if successful, they merely shift the clear-cut to another forest. It became obvious to me that the real answer to deforestation is to change the way paper is made.

To that end, in 1998, I teamed up with Canadian eco-entrepreneur Jeff Golfman and former politician and fourth-generation Manitoba farmer Clayton Manness.

Our initial attempt at making paper from agricultural waste must have resembled the first papyrus papers created in Egypt. It was perhaps best suited to be a drink coaster. But this start led us to Step Forward Paper, our current blend of 80-per-cent wheat and 20-per-cent FSC-certified paper. It took 14 years of research and development, and some generous support from the Canadian government, to bring Step Forward to market. It's also a stepping stone to the 100-per-cent wheat paper we're testing.

This is the beginning of the paper revolution. The next step is to build the world's first 100-per-cent tree-free, chlorine-free, off-the-grid mill in Manitoba. The new mill will create jobs, and domestic wheat farmers will have a new source of revenue for waste they currently burn or send to landfill. North American consumers and businesses will have an option for high-quality, eco-friendly copy paper that performs as well as heavily subsidized tree paper and costs the same as recycled paper.

There is a lot of talk but little action toward countering ecological crisis. It's inspiring that Corporate Knights is doing something real by being the first magazine in North America to print an entire issue on paper using mostly wheat-straw waste.

And I'm extremely proud that The Globe and Mail is contributing to this milestone. Approximately 100,000 print subscribers are receiving the magazine's special issue Monday.

Authors back push to use straw pulp paper for books
March 21, 2013 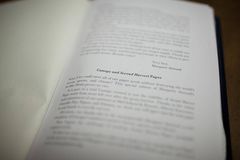