Tom Flanagan holds a research chair at the Frontier Centre for Public Policy. He managed the 2012 Wildrose campaign.

It was a great night for Rachel Notley and the Alberta NDP. The Alberta Liberals collapsed, giving the NDP free run on the left. Having won 53 of 87 seats, the NDP can govern for four years with a comfortable majority. But Ms. Notley should be realistic about her new popularity. The last three Alberta premiers – Ed Stelmach, Alison Redford, and Jim Prentice – also had high ratings when they assumed office, and look what happened to them.

Despite that note of caution, Ms. Notley's prospects may be quite bright if she keeps close tabs on her inexperienced caucus. A party of the centre-left can keep voters happy by borrowing money to pay for enhanced social services (remember the four straight victories for the Ontario Liberals). Eventually the debts become too large to ignore, but that could be years down the road, given Alberta's robust credit rating.

However, she must govern with moderation. It could be one-and-done if she pushes too hard to implement some of the further-left ideas in the NDP platform, such as a royalty review for oil and gas, higher taxes on corporations and high-income earners, and a $15 minimum wage. Can you spell capital flight?

The oil industry operates all over the world, and many parts of it are highly mobile. Departure of investors and workers would lead to lower tax revenues and higher budget deficits. Ms. Notley would not like to join the company of NDP premiers – Bob Rae in Ontario, Dave Barrett in British Columbia, Darrell Dexter in Nova Scotia – who also won unexpected victories but failed to achieve re-election.

Alberta is now moving into the same political configuration as in the other three Western provinces – the NDP as a party of the centre-left facing a large party of the centre-right (BC Liberals, Saskatchewan Party, Manitoba Progressive Conservatives). However, it will take time for the parties of the right to get together. The Progressive Conservatives got more popular votes than Wildrose (28 per cent to 24 per cent), but Wildrose won more seats (21 to 10) because its vote skews so heavily rural. There will be partisans in both parties who will think they can bury the other and emerge as the only champion of the right.

Yet the experience of the other Western provinces, going all the way back to the BC Liberal-Conservative coalition of 1945, is that the right needs to be united if it is going to defeat the social democrats. The story has been repeated over and over – splits on the right leading to NDP victories, reunification on the right leading to recapture of power.

Wildrose and the Progressive Conservatives need each other's members, donors, and voters if they are to defeat a consolidated centre-left. Wildrose has come back from the dead to retain official opposition status, but it is a rural party, shut out of Edmonton, Calgary, Red Deer, Lethbridge, and Medicine Hat. The PCs, now the third party in the legislature, face their own grave difficulties. They need to find a new leader; and the NDP will quickly move to abolish corporate donations to political parties and reduce the limit for personal donations from the current astronomical $30,000 in an election year to something more reasonable. Wildrose has learned to live on grassroots fundraising, but the PCs failed to cultivate that art while they thrived on corporate money.

In spite of the way they would complement each other, the PCs and Wildrose may not unite quickly. There is a lot of bad blood on both sides, and each can justifiably criticize the mistakes of the other. Reconciliation is the hardest part of politics. It will help if both sides follow Ronald Reagan's famous Eleventh Commandment (reworded for Alberta's circumstances): "Thou shalt not speak ill of any fellow conservative." 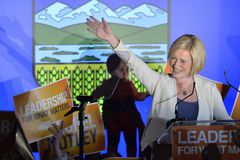 Opinion
One more way Prentice shot himself in the foot? A short election
May 5, 2015
Opinion
An NDP win in Alberta will boost the brand nationally
May 5, 2015