Canadian officials welcomed their Russian counterparts to Yellowknife last week for a senior arctic's official meeting for Arctic Council. While Prime Minister Stephen Harper has been leading the effort to expel Russia from the G8, officials have been insistent that Russian action in the Crimea will not affect circumpolar co-operation. Most observers have agreed that it will be business as usual when it comes to arctic co-operation. If only this was true.

It is hard to see how an increasingly assertive Russian government will not respond following its expulsion from the G8. It has been matching each western action with an equivalent action of its own following its move into Crimea. Russia may decide to boycott or hamper the work of the Arctic Council since Canada is the current chair, and Canada has been one of the most vocal critics of Russian action. But even if the Russians decide that it is in their interests not to hinder the actions of the Arctic Council, there are very significant forces that have been unleashed from the Russian action in the Ukraine that will spill into the Arctic.

The Russian intervention in the Ukraine has reignited the debate in both Finland and Sweden regarding full membership in NATO. This issue has been simmering in both countries since the previous Russian actions in Georgia. However, substantial public opinion in both countries opposing full membership has meant that neither has moved on this issue. But in the days following the Ukrainian crisis senior officials in both countries have indicated that they are now seriously thinking about joining. Finnish Prime Minister Jyrki Katainen has declared that Finland is not a neutral country and that membership is indeed a serious option. Swedish foreign minister Carl Bildt just gave a speech in which he made it clear that Russia has demonstrated that it is much more willing to use force to achieve its policy objectives. This then directly impacts Swedish security. Last year, the head of the Swedish military created considerable controversy when he publicly stated that Sweden could not defend itself against a foreign attack. All of this point to the possibility of Sweden seeking full membership.

If one or both of these countries do decide to seek full membership, Russia will see this as an effort by the alliance to encircle it in the arctic. Russian general Nikolai Makarov has already stated that Finland's NATO membership would constitute a direct threat to Russia. Under existing circumstances it is easy to understand why both countries would be giving serious consideration to joining the alliance, but is it is equally easy to see how such action will be seen by Russia as an aggressive act by NATO on its northern flank. In such an environment, no one should expect the previous decade of co-operation in the Arctic to proceed unaffected.

For Canada, such developments will be particularly challenging. While Canada has been one of the most vocal critics of Russian intervention in Ukrainian affairs, it has also been very reluctant to support new NATO action into the Arctic region. Mr. Harper made his reservations very clear to the secretary general of NATO, and it is reported that it has been Canada that has resisted ongoing Norwegian efforts to increase NATO's focus in the region. Canadian officials have even been reluctant to send troops over to Norway to participate in a large scale northern exercise – Cold Response – and have only very recently begun to participate, despite the rhetoric of the current governments regarding increasing Canadian arctic security capabilities. It has long been suspected that there is a concern of such action would antagonize Russia. Obviously Finnish or Swedish membership in the alliance will do precisely this.

What then will the Canadian government do? Will it support a Swedish and/or Finnish application or will it oppose it? If either country joins, will Canada become more supportive of an expanded role of NATO in the Arctic region or will it continue to oppose expanding the alliance's actions in the region? And how will all of this impact on Canada's proposed new capital programs regarding Arctic security? Will it need to rethink its decision to outfit its arctic offshore patrol vessels more for a mostly constabulary role rather than giving it a greater military capability? And what will it need to do regarding the replacement while of its F-18? And how will it reconcile its ongoing efforts to develop a co-operative and peaceful circumpolar region in the face of such new tensions? Thus the very face of Canadian Arctic security is about to change, and not for the better. 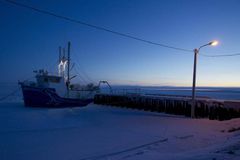