The most significant political event of post-Second World War Canada may be the enactment of the Charter of Rights and Freedoms. It has transformed a country obsessed with the federal-provincial division of powers and enabled it to address its diversity in a substantive, principled way. This was not inevitable. Credit is due in large part to the quality of the judicial branch of governance and, obviously, to the legal profession.

It often takes less foresight than good luck to succeed. The Charter of Rights could have gone the path of its disappointing predecessor, the Canadian Bill of Rights – a modest instrument of guidance to courts reluctant to challenge elected officials.

Many things contributed to the Charter's central role in our constitutional democracy. At least three were counterintuitive.

The notwithstanding clause: This allowed legislators to override protected rights. Offensive to legal purists, it proved to be the perfect political compromise – designed to preserve the supremacy of elected officials, it, in fact, allowed the courts to avoid undue deference to them.

The three-year moratorium on equality rights: Conceived to give Parliament and the provincial legislatures an opportunity to make laws compliant with the Charter, it had the effect of ensuring that the first cases to come to the courts were familiar ones. It was a small step for the courts to strike down writs of assistance and enforce the right to counsel, a modest increase in the exercise of their common law powers. Had they been confronted at the outset with issues such as mandatory retirement or even women's rights, they may have been much more hesitant to strike down offensive legislation, thereby creating a different, narrower scope for judicial review.

The Court Challenges Program: This was an admirable companion to the Charter. It expressed the government's faith and commitment to rights enforcement, by equipping litigants and civil-society organizations with the ability to access the courts. This, in turn, provided the courts with high-quality Charter litigation without which the remarkable early Charter jurisprudence might have taken much longer to develop.

Many will deplore so-called judicial activism and the legalization of politics. They are wrong. Fundamental rights enforced by independent courts enrich a democracy that has set constitutional limits on itself. Charter litigation has provided a high-quality intellectual forum in which to debate issues that are not best left to majority diktat. Led by the Supreme Court, the Canadian judiciary has defined its proper place in constitutional governance. First assertive and willing to undertake substantive review of legislation, it has set a predictable framework for acceptable limitations on rights and avoided an adversarial relationship with Parliament, preferring dialogue to confrontation.

Unlike the U.S. judiciary, Canadian courts have, for the most part, avoided the taint of partisan political allegiances that erodes confidence in the judicial process. My own career would be unimaginable in the United States. I had three federal judicial appointments: to the Ontario High Court, to the Court of Appeal and then to the Supreme Court of Canada – the first two by a Conservative government, the last one under a Liberal one. Canadian judicial writing is accessible, often consensual, and dissent always respectful. It has set the tone for the peaceful resolution of some of the most divisive issues in any society.

Unfortunately, political parties have been impoverished by the rise of judicial prominence, or perhaps simply in parallel to it. The disenchantment with political life is currently widespread in mature democracies. But in terms of substance, the calendar of the Supreme Court of Canada compares very favourably with the platform of political parties.

From a global perspective, Canada now stands in an envious position in terms of quality of institutional governance. As democracy spreads over the world, it doesn't always reach far beyond the setting of relatively free and fair elections. This often leads to stronger executive power and, at times, to a reasonably efficient legislative branch. Rarely is any attention given to the role of a professional, independent judiciary. It takes decades to construct, but in the resolution of conflicts, inevitable in any country, the rule of law is the best investment.

Louise Arbour is president and CEO of the International Crisis Group. 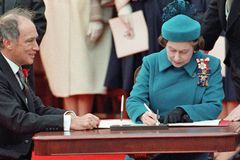 On constitutional questions, it's still Quebec vs. the rest of Canada
April 12, 2012