It can be seen from space. For more than a year, night-time satellite images have shown intense patches of orange along the upper eastern coast of the Bay of Bengal, south of Bangladesh and north of the long peninsula of the Irrawaddy Delta that forms the heart of Myanmar. During the past week, that orange streak has grown larger and brighter, and daytime images have shown why: Countless villages and towns in the northern state of Rakhine have been reduced to charred ruins as their residents, members of the Rohingya people, have been driven out of their traditional region, sometimes killed or brutalized, by Myanmar's military in what firsthand observers describe as a systematic ethnic cleansing.

The world has responded by zooming in from that orbital distance to Myanmar's capital and the woman who became the country's political leader last year after spending decades leading the struggle against the military dictatorship. Aung San Suu Kyi has shocked the world, to the point that some now talk of revoking her Nobel Peace Prize, by turning a blind eye to – and appearing to support – this expulsion and degradation of the country's 1.1 million Rohingya.

From that tight focal length, Ms. Suu Kyi's silence seems incomprehensible. In her decades as a dissident, she denounced the military junta's crushing of minority identities and rights. Burma, as Myanmar was known, had been cobbled together by the British colonizers from scores of tiny kingdoms and tribes and enclaves, which later military rulers tried to homogenize by force.

Globe editorial: What has happened to Aung San Suu Kyi?

Ms. Suu Kyi has largely devoted her years of freedom, from 2012 onward, to creating a more plural country. She is embroiled in complex peace negotiations with ethnic groups who had led violent armed struggles. Though they have not yet disarmed, Ms. Suu Kyi continues to negotiate with militia leaders of the Shan, the Pa'O, the Mon, the Karen, the Karenni, the Wa, the Palaung, the Jingpo, the Chin and others.

Her one exception has been the Rohingya, who are different in one key respect: They are not Buddhist. Though they have been resident in Myanmar since the ninth century, because of their religion the Rohingya were called "foreigners" by the military junta, which revoked their citizenship. Ms. Suu Kyi has not restored it.

She has referred to the Rohingya only as a "terrorist problem" – and while they do have violent militias that commit crimes, they are no different from the militias of those other ethnic groups. Former United Nations secretary-general Kofi Annan issued a detailed report last month, commissioned by Ms. Suu Kyi, that called to add them to the peace process; the only response has been ethnic cleansing.

If we ascend back to orbital distance, her motives become clearer. Myanmar does not exist in isolation; it is subject to Asia-wide trends. The anti-Rohingya hatred is a manifestation of the Buddhist fundamentalism that threatens the crescent of Buddhist-majority countries stretching from Sri Lanka through Myanmar and Thailand to Cambodia. These are mostly multireligious and multiethnic countries, and all have struggled in the past decade with the politics of Buddhist chauvinism and its often violent results. In Myanmar, it has become mainstream ideology.

From an even larger distance, we see that rather than resisting this trend, ethnic chauvinism is being encouraged and abetted by larger powers. Aung San Suu Kyi received a state visit this week from India's Prime Minister Narendra Modi, who gave his full support for what he called Myanmar's struggle against "extremist violence," citing "the experience of India." Mr. Modi has failed to distance himself from the Hindu-nationalist movements that brought him to power, damaging India's multifaith cohesion. Ms. Suu Kyi has also built close ties this year with China's leader Xi Jinping, who has intensified his country's repression of ethnic minorities, especially Muslim Uighurs.

This needn't be seen as a turn away from the West: After all, U.S. President Donald Trump and his government have been silent on the anti-Rohingya atrocities, and have removed promotion of democracy and human rights from international programs. While Canada and others have denounced the ethnic cleansing, there are currently a lot more voices telling Aung San Suu Kyi to continue on this path to religious demagoguery. It must seem to her as if the world is behind her.

Opinion
How Canada can respond to the carnage in Myanmar
September 6, 2017 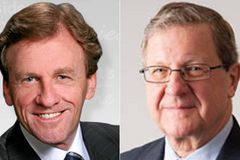 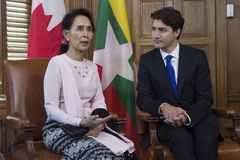