An ethnic minority targeted by its own country's military. Marauding troops burning villages and committing murder and rape. Large numbers of people forcibly displaced, fleeing in panic and leaving everything behind. Myanmar in October, 2017? Yes, but also Kosovo in March, 1999.

Then as now, a dysfunctional United Nations Security Council sputtered and stalled, stymied by a Russian veto. Determined not to become bystanders to mass atrocity, NATO members, including Canada, acted on their own. The generation shadowed by tragic failures in Rwanda and Srebrenica resolved not to add to that shameful list. Canada participated fully in the air war in Kosovo, supported the subsequent negotiations and sent troops in blue helmets for the long, hard peacemaking process that started with the withdrawal of Serbian forces in June, 1999, and continues to this day.

That military intervention by a "coalition of the willing" was controversial. Some contend it may have been legitimate but not legal. Others argue the matter is not that simple. The Security Council is a political body. The Russian veto, politically motivated, meant the council could not even schedule a vote to authorize the intervention. But the day after NATO bombing began, the council rejected (by a vote of 12-3) a resolution proposed by Russia to condemn it, meaning NATO had the council's political approval.

But did the NATO intervention succeed? What became of the people of Kosovo?

On a recent trip there, one of us took stock of the progress and the views of Kosovars by consulting academics, business leaders and civil society about the consequences of NATO's audacious campaign almost 20 years on.

The first answer was telling. A representative of a local NGO reminded us that half the people in the room would not be there had NATO not acted, so fierce and focused had the ethnic cleansing become. Beyond that, hundreds of thousands of Kosovars who fled or were expelled have returned to take up the task of nation building. Many others are helping from a distance, having started new lives as refugees elsewhere (Canada received 12,000 Kosovar refugees) and sending remittances to help fund the rebuilding.

There are other positive signs. The Kosovo Security Force is now recruiting cadets from the Serbian minority. Elections are held regularly and produce changes in government. A new generation – young, educated and engaged – is ready to take the place of those who survived the war years. And Kosovo has expressed support for liberal international values and institutions, unlike some other countries in the Balkans. There is broad support from the military, politicians and the public for Kosovo's ambition to join NATO.

There are challenges. Russia and Serbia have used their influence to exclude Kosovo from some trade agreements, slowing its economic progress. Political institutions are still developing, so the European Union is helping until Kosovo is ready to take over all vital public functions.

But after only a decade of independence and despite its challenges, today's Kosovo has a good chance of becoming a stable, secure and democratic nation.

Kosovo's success is evidence that international engagement can work. Properly executed and accompanied by a willingness to stay and help in the rebuilding process, such engagement can both protect people by stopping mass atrocities and help them recover. The Kosovo model stands in stark contrast to Libya, where NATO sent in its planes but then rushed home, leaving chaos in its wake.

There is surely a lesson here that can be applied in Myanmar. International engagement can succeed. It has the potential to stop the carnage. In the case of Myanmar, the Security Council could influence the murderous conduct of that country's military, even without military intervention, through targeted sanctions, an arms embargo and by referring the matter to the International Criminal Court. The council could also demand that Myanmar stop destroying homes and villages in Rakhine State and remove the land mines it has placed on its border with Bangladesh. This could be the first message conveyed by Bob Rae, the recently appointed Canadian envoy to Myanmar. Strong denunciation and practical measures may produce the change in behaviour we all want to see.

The other lesson from Kosovo, of course, is that when the Security Council fails in its very purpose, leaving us to choose between idly witnessing atrocities or finding a way to stop them, there comes a moment, as in March of 1999, when the council can find itself on the margins of events while others take the lead. In the case of Myanmar, the question for Canada and others to consider is when that moment may come. 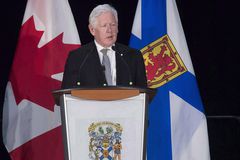