Robert Austin teaches at the Munk School of Global Affairs at the University of Toronto.

Hungarians voted "No" to resettling refugees in the country with a bizarre referendum on Sunday. The question was loaded, manipulative and hardly fair. But, unlike former British prime minister David Cameron, Hungarian Prime Minister Viktor Orban knows how to devise a question with only one possible answer.

Given the government's expensive propaganda campaign, in a crude paraphrase, Hungarians were asked if they wanted the European Union to have the right to settle terrorists in Hungary. Not surprisingly the overwhelming majority said no – case closed. Simple populism: We create fear then we save you from fear.

The referendum is meaningless on several levels: there was no legal basis for the EU to force refugees on unwilling countries and not enough people bothered to vote to make the poll valid. Plus, given the Hungarian attitude, few migrants wanted to go there anyway. The whole exercise was a costly sham.

However, what Hungary does is potentially meaningful in that it may tell us about some dangerous trends in EU member states. Europe's former Eastern Bloc countries – Czechs, Hungarians, Poles and Slovaks – are collectively saying they want a different type of Europe. They want more nation and less supra-nation – more Budapest and less Brussels, so to speak. Give us the cash, but we will pass on the liberal values.

Long before Hungarian xenophobia made headlines last year, Hungary was on record as opposing newcomers. According to the government, Hungary wants Hungarian babies to stem a declining population. Hungary wants people to come to Hungary, but they should be tourists not refugees. Come for a good time, not a long time.

Mr. Orban's political party, Fidesz, has charted a whole new course for Hungary and now he hopes to shape the EU's future, too. Mr. Orban transformed the previously liberal Fidesz into a national populist party that swept to power with a massive majority in 2010 and was returned to power again in 2014. Fidesz can govern without even acknowledging the opposition on either side of a now meaningless political spectrum. Only the radical nationalist Jobbik party really counts as an opposition.

That Fidesz is in power is revolutionary. The Hungary that it took over was broke, facing fiscal and other crises. The previous government had lied, plundered and over-promised. Fidesz in power was enraged, focused and truly popular. A new and controversial constitution that spoke of Hungary's need for "spiritual renewal" was brought in. Much of Hungarian history was rewritten, full citizenship was offered to Hungarians living outside its borders and there was a media clampdown. Mr. Orban concentrated state institutions in party hands. The much talked about war on corruption was nothing more than a war on the previous government's corruption. Some saw the Putinization of Hungary.

The EU and the United States denounced the shortcomings in Hungarian democracy, but nothing changed. On the bright side, Hungary got its fiscal house in order, unemployment dropped and more people paid taxes.

The refugee crisis opened a new rift with the EU. Central Europeans, with no experience with immigration, accustomed to being given money instead of giving it, and pointing to their largely failed experience with the Roma, did not want to take refugees. They were also tired of being told what to do.

Mr. Orban says his referendum exposes the flaws of the EU. He rages about the EU's two biggest linked failures: Brexit and refugees. He calls for stronger borders to defend not just Hungary, but Europe, too. Mr. Orban's message is simple: European civilization faces extinction.

And so the EU is left with a very big question: Does what happens in Budapest, Bratislava, Prague or Warsaw even matter? Central Europeans, largely as victims of history, have often shaped the future of Europe. This time around, they seek a new future that means the darker side of the nation-state is back. If Europe's mainstream parties cannot get their acts together, the future of Europe may well be national populists with their dangerous dreams of national renewal. 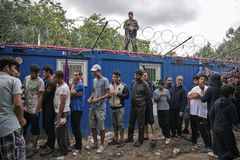