Aurel Braun is a professor of international relations and political science at the University of Toronto and a centre associate of the Davis Center, Harvard University. Among his books is Dilemmas of Transition: The Hungarian Experience.

Sixty years ago, on Oct. 23, 1956, a small country – Hungary – stood up against the might of the Soviet Union and commenced a revolution that rejected both Soviet and communist control. Moscow crushed the revolution and the aspirations of the Hungarian people with a brutality that shocked the world. For more than three decades Hungary remained under Soviet dominion, but today it is a relatively prosperous state, a member of the European Union and NATO.

The bravery of the Hungarian people, their endurance and their creativity, appeared to have ultimately paid off – and Sunday should have been a day of glorious celebration. Yet these are very troubling times for Hungary – with deep domestic fissures – and the profound frustration of the EU and Western democracies with Budapest keeps growing.

It could and should be different. After 1956, Hungarians creatively managed to ameliorate the repression of communism by modifying it into a somewhat gentler "goulash communism." In 1989, Hungarians took a brave leap, cracking open the Iron Curtain and letting East German visitors flee across the border into Austria, thereby helping to set in motion the fall of the communist dominoes in Eastern Europe. For many years after the collapse of communism, Hungary was deemed an exemplar of successful transition to democracy.

In recent years, however, Hungary has taken a different turn domestically and in its foreign policy. The 2008 recession certainly had an impact on the country, but the rise of extreme parties and ideas have also deeply affected the course of Hungarian politics.

Fidesz, the ruling party of Prime Minister Viktor Orban, began as a youthful libertarian movement but has become increasingly authoritarian. It commands an absolute majority in parliament but is wary of losing support to Jobbik, the third-largest party – a xenophobic, nativist, anti-Semitic and anti-democratic movement that hews to the darkest corners of Hungarian history and promotes ultranationalism and irredentism. Jobbik's toxic ideology has in certain respects leeched into the mainstream.

Mr. Orban, for example, brazenly declared in 2014 that he preferred an "illiberal state" and "illiberal democracy," citing Russia as his model. Mr. Orban has taken steps that in some ways disturbingly mirror those in Russia, cracking down on NGOs, constraining civil society organizations, impairing judicial independence and trying to control the media.

Further, the Orban government has encouraged anti-EU and anti-NATO sentiments, contending that the EU is unfairly restricting Hungary's sovereignty – despite the enormous economic benefits that Hungary has derived from membership.

Earlier this month, Mr. Orban organized a national referendum about closing the door to refugees from the Middle East – even though only 1,294 refugees were stipulated in the EU refugee-sharing quota. Democratic opposition parties argued that the referendum was an attempt to distract from his domestic failures and persuaded their supporters to boycott the vote.

Although 98 per cent of voters sided with Mr. Orban, only about 44 per cent of the electorate actually took part, well below the threshold and rendering the referendum invalid. Still, he declared that the referendum gave him a mandate to fight Brussels.

In a case of perverse historical irony, Mr. Orban has also become a vocal promoter of close relations with Russia at a time when the West is confronting and sanctioning Moscow for its aggression in Ukraine and its atrocities in Syria. It is understandable and desirable for Hungary to have decent relations with Russia, but Mr. Orban's admiration for President Vladimir Putin's authoritarianism and the success of Russian informational warfare have helped to make the Hungarian government a divisive force in NATO and in the EU.

Hungary thus is both a symbol of the power of hope and a lesson in how readily freedom may be dissipated and endangered. The morass of fear, scapegoating and personal ambition must be countered with civic involvement and a fostering of rights if Hungary is to be pulled back from the dark road it seems to be taking six decades after its enormous sacrifice for democracy and independence. 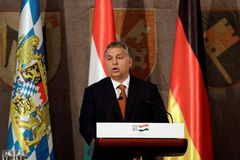