Ken Dryden is an author, former Liberal MP and member of the Hockey Hall of Fame.

Donald Trump has them flummoxed. The media, his Republican and Democratic opponents, they don't know what to do with him. And because they don't, more and more Americans like him.

In our Internet-fuelled world, where anything you say can be captured and dragged out by anyone, anywhere, any time, he is a perfect target. He has lived his life in public; he has insisted on attention. His record of outrageous doings and misdoings is outrageously lengthy, there to haunt him at every step. Yet to be embarrassed is to be weak, so Mr. Trump rejects embarrassment. He knows you can't fight every argument with counterargument, every charge with countercharge. You can spin, create doubt, or not give a darn. He chooses the latter. Unhauntable, he is the post-Internet person.

The wise and the reasonable take their best shots. They catalogue what he has said; the contradictions, hypocrisies, beliefs unsupported by evidence or science. They go blue in the face winning every argument by any objective measure, but, like the John Belushi character in the Saturday Night Live skit The Thing That Wouldn't Leave, Mr. Trump won't go away. He has rendered the traditionally powerful powerless. The learneds who are just so smart, the commentators who are just so smug, the know-everythings – he ignores them all.

The politicians who are just so tough, he engages with haymakers, eye gouges and kicks to the groin. He has fought more fights than all of them combined, bloodier ones. Business battles where Marquess of Queensberry rules don't apply; street brawls, far beyond the genteel boundaries of UFC, where anything goes. He has lost many of them, or so it seems to others, but to Mr. Trump, if you refuse to look like you've lost, you never lose.

But when the powerful lose power, when what gave them power seems not to matter – money, position, education, logic – they are left sputtering. To them, it is simply beyond belief that Mr. Trump is a contender to be the Republican presidential candidate. So they trash him – and the more they trash him, the more they are saying that those who support him are stupid, and the more even more Americans like him even more. The know-everythings are left with one comfort: They are sure he will self-destruct.

Except, it is what would make him self-destruct that has increased his support.

He is very different from most of those who support him. He is rich, urban, worldly and well-educated. He and his supporters seem to have little in common, but they share one big thing that crosses their divides. He is mad. They are mad. Mad that all those smart, privileged people who don't know what they are doing keep telling them what to do; treat them like know-nothings; make them feel they don't matter. Mad, above all, that America isn't what America is supposed to be. The United States is the biggest and richest and toughest and best and doesn't share that podium with anybody.

The know-everythings attack Mr. Trump on the issues, but they don't understand. It's not about the issues! It's about attitude. Like Occupy Wall Street or former Toronto mayor Rob Ford, it's a raging protest about how life is. But Mr. Trump doesn't get pushed around. He takes people on. If he bleeds, the other guy bleeds more. While others simply stand for something, he fights. And to his supporters, from white-rights groups to regular folks who worry about their future, it doesn't matter much what he fights for. Tired of being bullied by know-everythings, two-bit dictators and foreigners who take their jobs, Mr. Trump is their bully.

His hair embodies him. (The whispers of the political past: Does Bill Clinton dye his hair? Do the Bushes? Does Barack Obama?) Mr. Trump's hair is flaming orange. No person seeking a serious job would have hair like that. What does it say about someone who wants to be the most powerful person in the world that he would spend time cultivating such a thing? The know-everythings expect him to tidy up and become more presidential. You think I should deal with the consequences of how I look?, he says back to them. You deal with it.

Mr. Ford, in the depths of his term as mayor, after revelations of his crack cocaine use, his cover-ups and personal meltdowns, still had an approval rating above 40 per cent. Mr. Trump is much richer, smarter, tougher and more savvy than Mr. Ford. Yet, Mr. Trump appeals to the same people for the same reasons, and if those reasons don't go away, why would he? With uncertainty everywhere, his is the appeal of the certain. 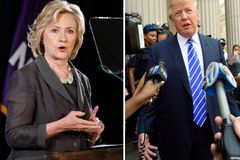