Izzeldin Abuelaish
Contributed to The Globe and Mail
Published July 9, 2014 Updated May 11, 2018

Izzeldin Abuelaish is a Palestinian physician and infertility expert who was born and raised in the Jabalia refugee camp in the Gaza Strip. Three of his daughters were killed in a 2009 Israeli military strike, an event he described in his book I Shall Not Hate: A Gaza Doctor's Journey. He is now an associate professor of global health at the University of Toronto.

Medical doctors treat diseases, not symptoms. Symptoms are just consequences of the actual disease. Treating them only hides the disease – and not for long. It does not eliminate or manage it. Patients sometimes care only about those symptoms, because symptoms can be very painful and patients want the symptoms to go away. And sometimes patients just don't want to admit they have a disease.

Imagine an uncaring or incompetent doctor who is content to treat the symptoms, to give the patient no more than a Band-Aid. The patient leaves smiling, but comes back a week later feeling just as bad, if not worse: the symptoms have returned, or new symptoms have emerged. Worse is when the symptoms return much later – weeks, months, years – at which time the disease is so advanced that it has done irreparable, or worse, fatal damage.

A disease is an impairment of an organism, caused by external or internal elements that are harmful to that organism, and is recognizable by its symptoms.

If so, hatred is a disease. Hatred is a disease caused by extended exposure to particular harms: humiliation, harassment, violation, deprivation, torture, dehumanization. Hatred of another is also caused by being hated by that other and by being exposed to hate speech from that other. One of most common symptoms of hatred is violence. The patient suffering from hatred responds to the source of those harms with physical or verbal violence.

Many Israelis and many Palestinians suffer from hatred. They display acts of extreme violence and atrocities to one another. Let us start with the case of Palestinians as suffering from the disease of hatred, caused by the occupation of their land, the violations, harassment, and deprivation of human rights that follow from it. Most of the doctors in charge of treatment, or at least capable of treatment, are only concerned with the symptoms, and only care about ending the violence. Anyone who witnesses Palestinians showing the symptoms of hatred, whether they are also the object of that hatred or not, are the doctors in question: not only Israelis, but the world community. The Band-Aid treatments prescribed by most of the doctors are bombs and more deprivations. These treatments might stop the violence momentarily, but it returns twofold, threefold; for the disease has not been treated. While the doctors were focusing on the symptoms, that is, on violence, this cancer named hatred has multiplied and spread.

And that is only part of the story. The violence and other harms Palestinians expose the Israelis to now cause many Israelis to experience hatred toward Palestinians in return, if they already do not. More violence ensues. Hatred begets violence; violence begets hatred. Hatred is a robust disease that repeats itself not only in its host, but also in its object. Tragically, it also repeats itself in many who witness it. Instead of displaying the courage to name the disease and try to treat it, individual members and states of the world community choose sides; they feel the humiliation or deprivation suffered by whatever side they identify with, and themselves became infected with hatred. Even the more peaceful individuals who are resistant to hatred suffer, distressed by the never ending cycles of hatred and violence. They are pushed to tears by the violence even in hate speech.

Violence and hatred go side by side and are a result of the exposure. The Palestinians are suffering of occupation for about five decades. Palestinians in Gaza Strip are facing the third war against Gazans in less than six years. How much can people tolerate?

How much more killing, suffering and pain can Israelis do and Palestinians endure. There have been hundreds of strikes recently by Israel, with more than 50 innocent people killed and 500 severely wounded. Gaza Strip is being bombarded. It is war against women and children, who constitute 70 per cent of the Gaza Strip population; it's human genocide.

I feel anger and pain as history repeats itself. The blood of my three daughters killed in 2009 did not dry, and the wound did not heal.

For that we need the courage to admit we suffer from a disease that is antithetical to respect, justice, and peace. Battles should be directed against the occupation, which is the threat and enemy to all of us as – Palestinians and Israelis.

Israel's leadership must be courageous and admit its failure to end the conflict by military means. The way is to end occupation

As passionate and competent doctors we must first contain the disease. To contain it, we prescribe the violence on both sides to stop; but even violence stopping on one side will begin the containment. One thing we can prescribe is cessation of the larger violence that comes from occupation and bombing. That will also stop some of the reciprocal hatred and violence, and contain hatred on both sides. Another thing we can prescribe is resistance to hatred. The patient will have to be courageous and just, and not allow hatred to take over when she or he is exposed to violent acts.

We may then begin to cure the disease. The cure requires that the peoples treat each other with respect, an end to human rights violations, deprivations humiliations, harassments, blaming, name-calling and hate speech.

Our responsibility as citizen-doctors is to make the correct diagnosis, and be compassionate and courageous enough to write the correct prescription. We must not allow our patient to ask for Band-Aids, and we must not be tempted to prescribe Band-Aids; we must also be critical of doctors that do so.

Israel steps up Gaza offensive as rockets fall and diplomatic efforts get underway
May 12, 2018 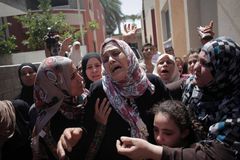 Israeli air strikes shake Gaza every few minutes
June 19, 2017
Follow us on Twitter @globedebate Opens in a new window
Report an error
Due to technical reasons, we have temporarily removed commenting from our articles. We hope to have this fixed soon. Thank you for your patience. If you are looking to give feedback on our new site, please send it along to feedback@globeandmail.com. If you want to write a letter to the editor, please forward to letters@globeandmail.com.
Comments