I am lying on the floor along with 24 other people, facing the ceiling. I'm trying to hold the toes of my left foot in mindful awareness as I breathe in and out. "Not judging them … just feeling them," says our guide in a soothing, soporific voice. By the time he reaches the right earlobe, I'm fast asleep.

This exercise is known as a body scan. It is designed to help you focus on the present moment – something that people in hurried, anxious, task-oriented Western cultures are very bad at. I have signed up for this course because I want to calm my critical, judging, anxious, unruly, restive mind, which has been giving me a hard time for more than half a century. I would like it to settle down so that I can enjoy the rest of my life with some measure of mental peace. After all, if not now, then when?

Our guru is a slight, soft-spoken 82-year-old white guy from the suburbs. He says he won't bother to learn our names because he'd just forget them. He says this is not group therapy and lengthy personal revelations are not welcome. He doesn't seem too interested in mystical new-age woo-woo. What a relief.

"How much of your time do you spend living in the past and the future instead of the present moment?" he asks the group. Some people say 75 per cent or 80 per cent. I say 90 per cent. Sometimes I can go for days without noticing the weather.

My fellow meditators include harassed professionals, new retirees, a couple of serious spiritual seekers and an engineer who was dragged here by his wife. What strikes me is how stressed and burdened they are.

Over the next few weeks, we practise quieting the mind by paying attention to the breath. We learn that we are not our thoughts, and that our thoughts aren't real, and that they flit across our minds like clouds across the sky. At first, it is extremely boring. Then I start to get the hang of it. Sometimes I can go for as long as half a minute without being distracted by intrusive thoughts, to-do lists and wondering what's in the fridge for dinner. Sometimes we practise walking very slowly back and forth across the room, staring at the floor. We look like extras from The Walking Dead. "I don't get it," says the engineer.

The Mindfulness Industrial Complex, as it is sometimes called, has come in for a lot of ridicule. Mindfulness has been commodified and packaged up as a cure for every ill, from chronic pain to anxiety, depression and attention deficit disorder. Meditation is marketed to business leaders and schoolchildren as a way to make them more focused and effective. The British Parliament even launched an initiative to spread the benefits of mindfulness in public life. Mindfulness courses are offered on every street corner and there are dozens of smartphone apps. Which just goes to show that Western capitalism can make a buck on anything.

One day in class we did something called the Raisin Exercise. In it, you contemplate a single raisin – touching it, smelling it, observing it, describing the little box it came in and finally, very slowly, chewing and swallowing it. Afterward, I thought: What if I paid as much attention to my husband as I did to the raisin? That night when he came home, I put down my iPad, gazed into his eyes and sincerely asked him how his day was. We had a real conversation. It was good. After that, I decided to stop nagging him as soon as he got up, before he had his coffee. I noticed I was doing it, so I stopped. Mindfulness was helping me to tame my inner critic and I figured that I might as well extend this benefit to him.

"I don't know what's happened," he said the other day, "but you seem to be a lot less crabby." The good thing is, he's less crabby, too. Living in the moment (not that I can manage it for more than a few minutes at a time) has definitely improved my mood. It has even made me nicer and more patient, because I'm not so distracted by where I have to go or what I have to do. I am not the sort of person who goes around performing random acts of kindness. But now I find myself assisting little old ladies through the airport. This isn't me. Or is it?

The other day I went to a vegan restaurant with my old friend Dan, who's a celebrated writer and producer. He's been practising meditation for 40 years. "Something weird has happened," I said. "I think I'm getting nicer." Also, I confessed, I am becoming quite emotional. He said that happens to him, too. I mentioned a movie that had made me sob uncontrollably, and he said it had had the same effect on him, and together we wept quietly into our gluten-free Thai noodle salad.

We were glad nobody we knew was there. We would have been stupendously embarrassed. 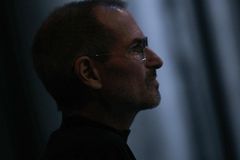 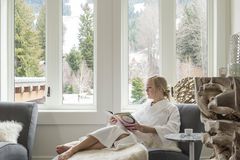 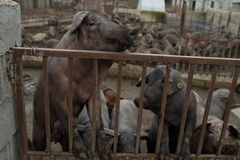