Patricia Gaines is an artist who divides her time between Springville, Alabama, and Monastery, Nova Scotia

For years, I was ashamed of Selma, Alabama. I saw this place as the start of much pain – in my own life, as well as a systemic root of a deep, terrible hurt in America.

In 1961, my family was run out of Selma. My father, a liberal minister, repeatedly failed so-called tests from the leaders of our Methodist church. His views on race – that all skin colours are welcome – were not welcome, and viewed as a threat.

They asked what he would do if a "coloured' man came into the back of our church and wanted to worship with us.

My father said he could not simultaneously teach the Bible and also tell anyone that he would not be welcomed in our church. "And what would you do if a coloured person wanted to have Communion with us?" asked the lay leader of our church.

"I would invite him down to the front row and serve him communion."

Of course, that was the right answer. But that Sunday at church, it was the wrong answer for the well-being of our family. This became abundantly clear very quickly: The following Sunday, men on horseback rounded the corner and came straight to our house, beside the church. They glared at my mom and I, as we sat on the front porch of our home. I'll never forget the hostility in their eyes. "Who are they?" I whispered to my mother. "The White Citizens' Council … they want to remind us of their presence."

Things got tense immediately afterward: someone called the bishop to tell him our family was not welcome in Selma. We felt the intense hostility from the congregation. We would hide whenever we saw the Klansmen piling their white sheets into their pickup trucks. I was young, but I could feel my parents' fear.

One night, my parents said we had to leave. We drove out of Selma after midnight, with our car lights off. During the five-hour drive to Mobile, the only sound in the car came from my mother, who was asking constantly if we were being followed. She felt ashamed, she said, because the last preacher was given a new car and his moving expenses were paid. And here we were, fearing for our safety, sneaking out of town. Running away from the hate and intolerance, we all felt shame.

It was years before I ever talked about this. I have spent most of my life avoiding Selma and running away from those feelings of shame, struggling to tell anyone about my home and why we left. I fled the shame of Selma, moving to Ireland, Wisconsin, New England and, finally, Nova Scotia.

But I moved back to Alabama after my children were grown and have lived a quiet and contemplative life on a lake outside Birmingham. That is, until a few days ago, when a robo-call telling me to vote for Judge Roy Moore in this week's U.S. senate election left me shaking and yelling into the phone.

It was time to leave my comfort zone. A call to the Doug Jones campaign headquarters asking where help was needed revealed that Selma needed drivers to take folks to the polls. My friend, Margaret, called and we decided to rent a van and drive to Selma the day of the vote. We hesitated, because of the dangerous and violent reputation of Selma. But we decided fear would not stop us.

We got up early, cast our own votes and then got on the road. The Jones headquarters in Selma was manned by two polite black young men. And we were indeed needed – 145 people needed rides. Our first pickup was 20 minutes outside Selma in Orville. We drove a middle-aged black woman, Mrs. Johnson, to her polling station, only to find that the IDs of black women were being questioned. We objected loud and clear: voter suppression in this state – and in this country – is widespread. We were going to help the silenced people of Selma have a voice in this election, even if it was only Mrs. Johnson's.

She eventually found a new piece of identification, and was able to cast her vote. We waited for our passenger at the poll, and then drove her home – but she wanted to stay with us, all day. She wanted to witness, and she wanted to help.

Headquarters sent us to a polling station where the voting machine was down. We were met with some degree of unpleasantness and were told the machine was only down for a few minutes. A black man, clearly angry, told us that was not true, that it had been down almost an hour and that voters were turned away. He said they were not offered paper ballots, but simply turned away. We spoke to another voter who said the same station had inhibited voters in the general election, saying their names where not on the voters list. One man saw his name upside down and pointed it out. The voting attendants told us to leave, to stay 30 feet away and not to interfere. We called headquarters and, very soon to our utter relief, a voter-fraud-protection lawyer arrived. This was the first of several voting issues we were asked to investigate.

We went to help get out the vote, but instead we were bombarded by requests to help where voters were being turned away. The barrage of requests – to investigate problems with ID, problems with the voting booths, problems with voter lists – filled our day. And Mrs. Johnson helped, too.

By 5 p.m., weary and spent, we went back to headquarters where we were told to revisit all the polls. There were still long lines. We encouraged voters – many of whom were African Americans, many of whom had been standing in line for hours – to stay, and brought food and hot chocolate.

We raced down to the convention centre in time to hear Doug Jones speak and celebrate Alabama turning the tide on the insanity that has been our political circus in the past. The African Americans of Selma, despite or because of their tortured past, saved us in Alabama.

I remain so moved, so proud of Selma. There was so much hugging and crying and celebration of blacks and whites working together for a common cause: peace and justice for all. That night, we got our country back. That night, Alabama demonstrated that if we each activate and do one small thing, we can change the course of history. My one small thing, it turned out, was finally returning to Selma.

Before we left Selma, I asked Margaret to drive by the Methodist church. I stood there for a long while, walked next door and sat in the exact spot where I was when I saw the riders on horseback back in 1961. I no longer felt ashamed of this spot, but a deep pride for my country, my state, and Selma.

Opinion
Alabama proves that appealing to Trump voters is a lost cause. The power is elsewhere
December 13, 2017 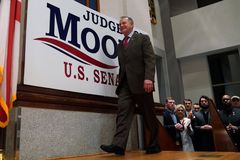