We are about 10 months away from the next Ontario provincial election, and electricity policy is likely to be one of the top five ballot issues. What follows is a short list of ideas, available free to any political party, on what should make up an electricity policy platform.

1. Reaffirm the principle that making Ontario's electricity prices competitive with our neighbours is the overriding objective. This principle has been sadly neglected in the recent "maximum renewables whatever the cost" era of Ontario's Green Energy Act. The price of electricity should be set in the market, but electricity policy should be guided by a comprehensive, independent regulatory analysis of which of the various generation, transmission and demand management options offer the lowest, long-term life-cycle costs.

This analysis should consider all costs, including environmental, such as the cost of long-term nuclear waste storage, mercury emissions from flooding, greenhouse-gas impacts from backing up intermittent solar and wind generation, etc.

2. Recognize that dispatchability is key to operating a power system. Demand and supply must be instantaneously matched, and this means generators must be dispatched on and off the system. Wind and solar power are intermittent, variable and non-dispatchable. Hydroelectricity is renewable and dispatchable.

There are 2000 megawatts of hydro power waiting to be developed in Ontario's north. In its 2007 integrated plan, the Ontario Power Authority said this option is the most cost-effective of all renewables, including the cost of transmission incorporation.

3. Overcome Ontario's delusional obsession with electricity self-sufficiency. It is delusional because two-thirds of our power is made from primary energy sources (uranium, natural gas, coal) sourced outside the province. If Boston can rely on northern Canadian hydro power for a substantial portion of its power, why can't Toronto? Ontario sits between the two lowest-cost power jurisdictions in Canada - Manitoba and Quebec. Once we've built out our own untapped and renewable northern hydro power, let's import more from our neighbours. Ontario has world-beating expertise in transmitting high voltage power through climate and distance; let's use it.

5. Rationalize Ontario's power sector. The government has announced its intention to reduce the number of agencies, boards and commissions as part of its austerity program. Recombining parts of the power sector must be done with extreme care. For example, the planning parts of the OPA could be merged with the Independent Electricity System Operator, but if the contracting for long-term supply that the OPA currently does joins the IESO, the "I" (for "independent") will be lost and the credibility of the Ontario market structure destroyed.

There is, however, room in Ontario's power sector for significant rationalization and that's on the distribution wires side. This sector offers major opportunities for economies of scale. Local distribution companies should be encouraged to amalgamate or, at the least, share scalable network services (e.g. billing, metering, forestry, line maintenance) to reduce costs.

6. Do not build social programs on the backs of ratepayers. No future government will be elected on the basis of tax increases; but unlike in other sectors (mining, forestry, chemicals, steel, autos, telecom, gas distribution, etc.), in the electricity sector, the province owns the lion's share of the assets and can send directives to the regulator.

This tempts every government to build social programs (e.g. employment programs) and charge them to the electricity ratepayer (e.g. creating an Ontario nuclear industry, or an Ontario industrial windmill manufacturing industry). No new taxes should also mean no further plundering of the capital pool made available by raising electricity rates by ministerial direction. The best way to prevent this in future is by taking the assets out of the province's hands, and relying on a well-funded, independent regulator to protect the consumer without ministerial direction.

By taking these six positions, a political party would have a rational and comprehensible electricity policy to offer voters in the October, 2011, election.

Rod Taylor is former executive vice-president, Hydro One, and was a member of the board of the Ontario Independent Market Operator and sat on Ontario's Market Design Committee. 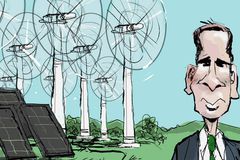