The attacks in Brussels reveal that the strategy to defeat Islamic State is in shambles. Many in the West, including Canada, are living in a surreal bubble of imagination – thinking IS will somehow self-destruct, yet unwilling to do what it takes to extinguish the IS flame of inspiration, direction and support to adherents in our midst. Lighting up monuments in the colours of Belgium to demonstrate solidarity is nice, but ultimately meaningless.

The Brussels attack was not unexpected. Belgian security forces have been on high alert since Salah Abdeslam, one of the Paris bombers, returned to their country last fall. The Belgians conducted raid after raid, locked down Brussels on several occasions in anticipation of an attack – a lot of security work that did not prevent this week's carnage at Zaventem Airport and Maelbeek subway station.

Our unwillingness to materially expand the effort against IS in Syria and Iraq is assuring that the battlefield will be over here, rather than fighting IS over there.

We should take stock of what fighting at home means and the stark choices it imposes on us.

Already, experts are advising that, beyond security inside airports preventing bombs on airplanes, security rings should be expanded to include all airport lands. In practice that means kilometres from an airport you'd pass an armed checkpoint and have your car and baggage sniffed for explosives before you could park and enter a terminal. Why would this logic be limited to airports? Why not commuter trains and subways?

Anti-immigrant rhetoric has risen in the United States and Europe: Profiling of residents in Muslim communities and arbitrary security stops of people to check their papers are slowly becoming mainstream ideas. It won't stop at profiled communities. In Belgium, preventive detention, house arrests and stopping people without probable cause is now a reality.

Do we wish to live as we have in the past – in a free society – or do we trade liberties for draconian security measures to create the illusion of safety? Clearly, the latter option has not prevented Paris, and now Brussels. Nor have we considered cost. Every dollar spent on security and screening is a dollar not spent on health care.

By not taking the attack to IS in its homeland, the West continues to play into IS's strategy: Draconian security measures boost the narrative of a civilizational struggle. Retaining lands, dispensing its form of justice, raising a new generation of children schooled in the curriculum of terror and providing direction and material support to adherents in our own lands only promises that we will be in a long war.

Rather than withdrawing our fighters, we should be quadrupling the numbers. As a point of comparison, even if the total coalition effort currently devoted to Iraq and Syria were quadrupled, it would only represent half the effort committed to Gulf War One – arguably the last time that the West won anything in the Middle East.

A massive intervention, not only of air power but of boots on the ground, is the only thing that will eliminate IS as a source of inspiration. As long as IS exists, the inspiration will remain.

But it cannot simply be a military effort. Planning for a new system of government, for rebuilding, must be a part of the solution to fill the vacuum the military action would create. Over the five years of the Syrian civil war (a different conflict) and the two years since the emergence of Islamic State – the so-called international counternarrative has yet to be developed or propagated. The international donors conferences for reconstruction have yet to materialize. UN-mandated forces for peace and the development of governance, education and justice systems to replace IS are nowhere in sight.

And so, we default to defending here at home, as we have been unwilling to fight over there. The results will be more attacks like the ones in Brussels and Paris.

Opinion
A crumbling ‘caliphate’ is still a threat to Canada
March 23, 2016
Opinion
The Brussels attack: A blow to the heart of the EU
March 22, 2016

Aiding and abetting can be massively deadly
March 23, 2016 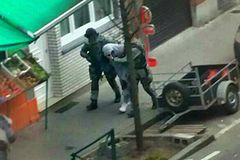