Just when it looked as if Donald Trump might be mellowing came the unsettling symbolism of his weekend meeting with Nigel Farage, a seasoned pro of nativist politics. The leader of Britain's pro-Brexit forces and the U.S. president-elect, Mr. Trump's campaign manager explained, chatted "about freedom and winning and what this all means for the world."

Just what does it mean? Kindred spirits or co-conspirators, Mr. Trump and Mr. Farage owe their respective victories – Mr. Farage's came in June's British referendum on leaving the European Union – to the popular backlash against globalization that they fomented with their fearful claims about the negative impacts of trade agreements and immigration. Closing their borders, they told voters left behind by technological change and ill at ease with the new demography, was the only way to recover what, in truth, is lost forever.

There is no understating the significance of the anti-globalization backlash in U.S. and British politics. These aren't just any two countries. The United States and Britain have been the guarantors of the international order since the Second World War. Their "special relationship" led to the end of the Cold War and the growth in world trade and investment flows that lifted living standards almost everywhere and ensured the global peace.

Analysis: The countries that will gain and lose from Trump's presidency

When these two turn inward, the whole world must watch out. Not only is the risk of political contagion rising – with France, the Netherlands and Germany witnessing their own nativist uprisings on the eve of national elections – a new era of U.S.-led "deglobalization" will make the world poorer, meaner and more unstable. History suggests it will not end well.

For years, political and economic elites have insisted the forces of globalization are too strong to reverse. The global economy is so interconnected that no national government could, or would want to, unwind the prosperity that decades of increasing integration had brought.

Students of history know better. Pendulum swings are humankind's one constant. Global trade cratered during the past recession and, since then, has grown at half the rate it did during the two decades preceding 2008. Recent data suggest trade contracted in the first half of 2016.

The last time Britain and the United States cut themselves off from the global trading system, in a fit of protectionism at the outset of the Great Depression, the world paid a horrific price. In the 1930s, Britain abandoned the gold standard, devalued its currency and slapped tariffs on non-empire imports. The United States followed with its own devaluation and tariff wall.

We know how that ended. U.S. and British economic nationalism gave licence to Germany and Japan to pursue their own protectionist policies and nativist politics.

"The world was a lot poorer when [Britain] and the United States prioritized their own economic recovery [in the 1930s] without regard for the international system," Pierpaolo Barbieri of the Applied History Project at Harvard University notes. "The systems that states destroy in only a few years can take decades to repair."

Only too late did the world realize the folly of the America First mindset of the 1930s that Mr. Trump has made his mantra.

"The Trump trade plan breaks with the globalist wings of both the Republican and Democratic parties," a Trump transition team document obtained by CNN notes. "The Trump administration will reverse decades of conciliatory trade policy. New trade agreements will be negotiated that provide for the interests of U.S. workers and companies first."

This could get ugly. Mr. Trump's inflationary tax and spending promises have already pushed interest rates higher, sending the U.S. dollar to near-record highs against most other major currencies. The British pound, in turn, has been in freefall against the euro since the Brexit vote, empowering the voices of trade retaliation on the continent.

A strong U.S. dollar is usually considered positive for the global financial system. But Mr. Trump has repeatedly accused U.S. trading partners of manipulating their currencies to gain trade advantage. If he responds to the greenback's rise with punitive measures against China, Europe or Canada, he will set off a round of tit-for-tat protectionism that ends in a global recession, if not far worse. History should make him think twice, but Mr. Trump is not known for second-guessing himself. 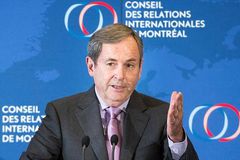 ‘They need us,’ Ontario’s Duguid says on trade with U.S. after Trump win
November 16, 2016
Follow Konrad Yakabuski on Twitter @konradyakabuski
Report an error Editorial code of conduct
Due to technical reasons, we have temporarily removed commenting from our articles. We hope to have this fixed soon. Thank you for your patience. If you are looking to give feedback on our new site, please send it along to feedback@globeandmail.com. If you want to write a letter to the editor, please forward to letters@globeandmail.com.
Comments