Peter Klein is the director of the University of British Columbia Global Reporting Centre.

In the Indian city of Ahmednagar, people experiencing symptoms like depression or hallucinations queue outside the "clinic" of Abid Kadri, a fourth-generation healer who is the first – and often only – line of treatment for people suffering from mental illness.

Kadri explains to his "patients" that the spirit of someone who died prematurely has entered their body, and he conducts exorcisms to expunge the ghosts. He also has the predominantly Muslim clientele pick a verse from the Koran, which he writes onto a piece of paper with a brush dipped in saffron, and asks them to make tea with the scrap, in order to help heal.

It may sound ridiculous to Western readers, but the support Kadri offers them is not unlike that of a therapist. He gives them a safe place to share their problems, takes them seriously and offers them an understandable interpretation of their condition. In a country where most people do not complete high school, there is spotty understanding about the medical complexities of psychiatric illnesses. Even in one of the best mental hospitals in India, doctors sometimes explain clinical conditions to patients in these spiritual terms.

There is still huge stigma around having a mental disorder, in places like India, but discussing it in such terms simplifies the challenge of addressing the problem that people with conditions like depression, psychosis and anxiety disorders face all over the world. The word "stigma" comes from the Greek for "mark on the skin," suggesting that people with these conditions are somehow identified as different. That is certainly true, but it goes deeper.

Not that long ago, "cancer" was spoken in only whispers – out of embarrassment by those who had it, and out of fear by everyone else. Today, people with cancer proudly declare their disease on T-shirts and march to raise research funds.

What changed? Science. Back then, cancer was largely a death sentence, but today there is far greater understanding about the disease, and many forms are treatable.

The science of psychiatry is still in its infancy. The physician's manual that defines mental illnesses, the DSM – Diagnostic Statistical Manual of Psychological Disorders – is dramatically revised every few decades, adding and dropping conditions, and redefining diagnoses. Many doctors admit that the mechanisms by which mental disorders work are still largely a mystery.

So it should come as no surprise that people have come up with their own explanations, and their own treatments, for mental illnesses. In a year-long project called "Out of the Shadows," a group of students and colleagues of the UBC International Reporting Program reported on how mental illness is addressed throughout the globe, and we witnessed some common themes.

In Togo, we found more than 150 people chained to trees in a forest grove, left there because they are believed to have some form of mental illness. The camp is run by a Togolese priest who claims to be able to heal these sick people and promises to free them once they are cured. In reality, they just rot in their own filth, often for months, without any real treatment.

In Benin, priests in white robes put their hands on people suffering from mental illness and claim to be able to transfer evil spirits into trees.

In Somalia, people with serious mental disorders are sometimes locked in a room with hyenas, under the belief that these vicious animals have the power to scare away the evil spirit, the "djinni," that has supposedly possessed them.

It's easy to dismiss these stories as the work of ignorant people with harmful superstitions, but we don't have to look overseas for disturbing mythologies. After the all-too-common mass shooting in the U.S., the media usually trot out stories of the shooters' histories of mental illness, drumming up fear of people with diagnoses like schizophrenia, bipolar disorder and Asperger Syndrome.

Mental illness is no doubt a common characteristic of many of these shooters, but the statistics do not justify the fear. More than 5 per cent of the population in Canada and the U.S. suffers from some form of the serious mental disorders that are common to these shooters, but mentally ill people rarely ever turn to violence, and are far more likely to be the victims of violence.

However, TV shows and films continue to perpetuate the idea of the "criminally insane" and the dangers of the mentally ill. A University of Calgary study found that the majority of three dozen Disney animated movies they studied portrayed characters who were described as "crazy," "nuts" or "mad."

We fear what we don't understand, and the bottom line is that we still don't understand many of the causes, or the treatments, of psychiatric conditions. As a result, we are plagued with shame around mental illness all over the world, but stigma is just the symptom. Ignorance is the cause. Science and education are the cure.

Trigger warnings are the least we can do to help trauma survivors feel safe
October 16, 2015

When dealing with mental illness, help is only a phone call away
September 24, 2015 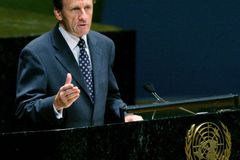