Susan Khazaeli is a PhD Candidate at the University of Ottawa and a fellow at the NESA Center for Strategic Studies in Washington. She acknowledges the assistance of the Program on Strategic Stability Evaluation and the Carnegie Corporation.

Iran and the P5+1 group have agreed to a four-month extension of talks to resolve concerns about Iran's nuclear program. To this point, negotiations have yielded progress. Though major differences remain on key issues, closing the gap is possible by November.

Even before the extension was confirmed, naysayers, radicals, and conservatives opposed from the beginning to the diplomatic track claimed a victory. (Of course, the only outcome that would please them is one in which Iran dismantles its entire nuclear program and transforms into a liberal democracy.) This camp has a powerful equivalent in Tehran that is ideologically committed to enmity with the West.

One challenge is managing public expectations. Iran and the United States must persuade conservative domestic groups of the merits of continuing negotiations. President Barack Obama must restrain a Congress that is eager to implement sanctions that could scuttle talks. Mr. Obama may again have to veto sanctions legislation, although four months is not enough time for Congress to take decisive action.

Iranian President Hassan Rouhani has staked his political capital towards making diplomacy work. He and his negotiating team understand – as does the Supreme Leader who endorsed them – that failing to resolve the nuclear issue threatens the future stability of Iran. Just as Mr. Obama – who faces midterm elections in November – is cautious of doing anything that could be taken by his conservative opponents as letting Iran to move closer to developing nuclear weapons, Mr. Rouhani is wary of appearing to his conservatives as buckling under Western pressure.

The P5+1 have demanded further reductions to Iran's enrichment capacity. Though it has stopped enriching uranium in full compliance with the interim agreement it signed in November, Iran holds firm that it has the legal right to enrich uranium. The standoff concerns the oft-repeated technical notion of 'break-out capacity.' This refers to the amount of time that it would take Iran to produce enough highly enriched uranium for a nuclear weapon, if it were to choose to do so.

The term (and the proverbial 'redline') has been left out of the negotiations. Yet, the scope and scale of Iran's nuclear program lies at the heart of the formal discussions. Iran currently has about 19,000 to 22,000 centrifuges – more than quadruple what the U.S. is reported to accept.

The P5+1 negotiators have been wrong to focus on centrifuges – not least because they are, in essence, dictating to Iran, but because it is the wrong metric of a good deal. Most non-proliferation and arms control experts are agreed that only verification can achieve the ultimate goal of preventing an Iranian nuclear weapon. For now, Iran's facilities at Natanz and Fordow are subject to daily inspections. Under such scrutinous conditions, Iran is not liable to 'break-out.'

Iran insists that it needs more than its current stock to produce fuel for nuclear energy. The six powers say that Iran can obtain fuel from foreign providers. Given Iran's past experience with Eurodif, it has expressed concerns about interruptions in supply. Reliance on foreign energy suppliers is dicey; ask Ukraine.

Still, any comprehensive agreement will require all parties to live with some uncertainty. The West must accept that Iran retains the technical capacity to build a nuclear weapon if it ever wanted. Nothing can eliminate this possibility, even if the U.S. and others took to repeated bombings – an act that is not only inhumane but also illegal as per UNSCR 487. Iran must also accept that its nuclear program will be beholden to foreign suppliers.

If the P5+1's objective is to ensure that Iran's nuclear program is peaceful, and Iran's is to remain self-sufficient, then there is a credible way forward. Such a formula might combine robust verification with strong fuel-supply guarantees.

Washington should, in the future, refrain from actions that undermine the moderates in Tehran who are committed not only to solving the nuclear impasse but also to reintegrating in the international community. In the meantime, the extension prolongs IAEA monitoring measures and restrictions on Iranian nuclear activities of greatest proliferation concern. It is important to realize that Iran will not accept just any deal that violates its rights to pursue the peaceful use of nuclear energy. If Iran were to accept indefinite restrictions (as some in Washington unrealistically demand), for example, it would mean 'losing face.' It is entirely conceivable then that Iran's leaders might opt to incur economic costs rather than accept such differential treatment. After all, this is a leadership that came to power avowing to reverse the history of capitulation to external powers. 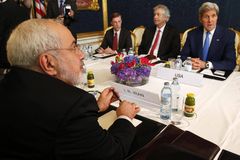