Another year, another acronym. This time it is CETA, and one we should welcome. CETA is The Comprehensive Economic and Trade Agreement, signed in October by Prime Minister Stephen Harper and European Commission President Jose Manuel Barroso. It was by far the most significant development of 2013, a far-reaching accomplishment that, when implemented in two years, will both broaden and strengthen Canada's economy for decades to come. Moreover, it adds to Canada's arsenal in negotiating trade agreements with countries and regions in Asia, a sweeping continent that is Canada's next economic target.

What we are seeing are first steps in a major economic shift. Just as the twentieth century saw a major change in Canada's economic emphasis from Britain to the United States, so the twenty-first century will put meat on the bones of Canada's economic commitment to globalization.

On the other end of the usefulness scale, it is tempting to assess 2013 without reference to the Senate and Toronto Mayor Rob Ford, but their overwhelming domination of the news does not make this possible. The antics of both have led to public disappointment and distaste – in probably equal proportions. The distaste may be reinforced in some cases by partisan considerations; the disappointment is felt universally by Canadians, most of whom may love a good scandal for a brief time, but genuinely want to ensure our institutions function in the national interest.

The relentless focus on Senators and on Mr. Ford not only raises cynicism about the institutions they represent, but forces us to wonder about the performance of all of our institutions. Even a casual observer would note that most of them did not move the dial much past mediocre.

Political bodies are always everyone's favourite targets: from the time of Julius Caesar, and no doubt before, the public has complained about politicians and parliaments: their perceived corruption, incompetence and worse. So it is probably wrong to say that 2013 set any new lows. But throughout the year the vituperative level of debate and personal attacks never slackened. There was little evidence of the mutual, if muted, respect for all sides, or the occasional camaraderie that occasionally breaks out in the House of Commons or even in Toronto City Council.

The implications of this heightened level of malice are distressing.

Samara, a private sector think tank, established a major project in 2013 asking politically disengaged Canadians about the barriers they face to being politically active. The most frequently cited barrier was a lack of political role models. Equally important, while 55 per cent of Canadians are active volunteers across a variety of causes, only 10 per cent have volunteered on a political campaign in the last five years. This demonstrates an almost complete absence of personal pride in our political institutions, the most fundamental building blocks in our democracy. Is there any reason to expect our idealism to return in 2014?

It was not only political institutions that disappointed. With some notable exceptions, the "media" – in theory another pillar in any democratic society – jettisoned any pretence at reliability, serious perusal of important issues as they arose or thoughtful analysis of their implications. Journalists who should know better savoured every salacious morsel of scandal, usually without verification, and threw it back in the public's face. No wonder Canadians lose faith.

Look elsewhere. The U.S. Congress did not distinguish itself; nor did the White House: Americans are stuck with a byzantine health package because leaders on all sides forgot that reasonable people can disagree honourably, and come to a rational compromise.

In Britain, the News of the World phone hacking trial began with a level of sensationalism not seen since the Profumo scandals of the 1960's. On other fronts, phones of world leaders were hacked by other world leaders, and Edward Snowden showed us that in the digital world standards have yet to be established for trust and loyalty. We seem to have forgotten that discretion is not a dirty word.

Amazingly, at least to me, it was the Catholic Church that shed some illumination on this dreary landscape. Who knew the College of Cardinals, historically that most clandestine and self–serving of powerful institutions, would send up the white smoke for a man known for humility and simplicity? Time Magazine even had the good sense to name Pope Francis its Man of the Year. A reminder that often good things do happen to good people.

Opinion
As Mandela is remembered, a moment of praise for F.W. de Klerk
December 11, 2013

Without business on board, economic diplomacy means nothing
Subscriber content
November 30, 2013 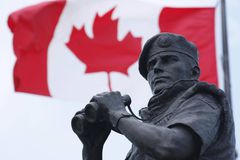 Opinion
MPs, senators, pundits: Please go home. May we never see a Parliament like this one again
June 21, 2013

Opinion
Turkey is an important partner. Why do we treat it like an outsider?
September 27, 2013