Robert Muggah and Athena Kolbe
Contributed to The Globe and Mail
Published March 5, 2012 Updated May 3, 2018

The danger signs are literally written on the wall. Many of Port-au-Prince's graffiti-stained neighbourhoods are facing a dramatic escalation in homicidal violence. The surge in murder, property crime and assault began less than six months ago and is accelerating. There are genuine fears that the situation will deteriorate further. Unless support for the national police is redoubled and United Nations peacekeepers scale up their efforts, the situation will rapidly unravel.

It wasn't supposed to be like this. The spike in violence should be offset against the remarkable gains in safety and security made since 2007. Early last year, Haiti's homicide rate dropped to historic lows, on par with the global average at about 7 per 100,000 people and well below rates in nearby Jamaica and Trinidad and Tobago. Even before the 2010 earthquake, poll after poll indicated growing confidence in Haiti's reconstituted police force and public institutions.

But the agonizingly slow place of reconstruction is taking its toll. Despite modest evidence of recovery, Port-au-Prince looks much as it did two years ago. And since last year's bitterly contested election, President Michel Martelly has yet to make good on his campaign promise of "building back better." The abrupt resignation of prime minister Garry Conille last month confirms the administration is floundering.

With so little to show for the billions of aid dollars pledged, youths are growing restless. There are signs that some of the older neighbourhood self-defence groups – the bazes – are being overtaken by younger, less ideological, more predatory gangs. Many emerged after the earthquake and are showing less hesitancy to cross into competing neighbourhoods to assassinate enemies and prey on the vulnerable.

And the earthquake is still being felt far beyond the rubble-lined streets. The gradual decline of donor assistance is undermining community leadership and resulting in ever-more aggressive demands for youth employment. Garbage is strewn about the city and clean water is in short supply. And while stability operations led by the UN and non-governmental agencies such as Viva Rio have helped calm the situation in some neighbourhoods, these are losing steam.

Most of the violence appears concentrated in the capital's so-called popular zones. Port-au-Prince's homicide rate has shot up from below 10 per 100,000 in 2007 to more than 60 per 100,000 early this year. Household surveys we have been conducting since last August show that residents of lower-income areas are more than 20 times more likely than those living in wealthy areas to be victims of property crime. They are 27 times more likely to be sexually assaulted and 18 times more likely to be physically assaulted. Popular confidence in the national police is falling as residents complain of misconduct, including bribery and sexual harassment.

To overcome the crime problem, a professional national police force is essential. Haiti's government must redouble its vetting and recruitment drive and ensure that officers are adequately monitored and rewarded for their service. Likewise, the UN and international donors need to encourage the political establishment to make good on its commitment to rebuild a meaningful social contract, inclusive of poor and historically marginalized communities. If it fails, the walls will almost surely come crashing down.

Regrettable that human rights cases against Duvalier will not proceed
May 3, 2018 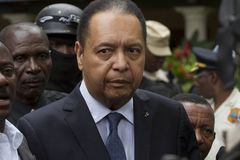