Eighty per cent of Quebeckers use the health-care system each year. Apart from the tax system, it's hard to think of another government service that touches so many Quebeckers, and people elsewhere in Canada.

The numbers are remarkable: 4.6 million visits to the doctor, 3.8 million to emergency, 5.3 million medical consultations and 476,000 surgeries. The health sector employs 400,000 people, 276,000 of them in the public system. At 12 per cent of Quebec's economy, health care is the most important sector.

The raw numbers would obviously be different in other provinces, but health care's importance to citizens and its share of the economy would be much the same. No wonder, then, that proposed changes would be politically touchy. To this is added the extra fear that change will lead inexorably to U.S.-style medicine.

What do Quebeckers get for their money? "One of the best health systems in the world," according to the government.

Governments, one supposes, have to say things like this, although Quebec's population doesn't believe it and international comparative studies don't show it. They demonstrate instead that the Canadian system - and therefore the Quebec's - ranks somewhere in the middle of the Western world for efficiency and effectiveness, while costing among the most.

Health-care spending in Quebec has been growing by 5.8 per cent a year since 2003-04, compared to 3.6 per cent for all other areas of government activity. Put another way, health care took $10-billion of the additional $19-billion for all purposes the government has spent since 2003-04.

Quebec has a public drug plan. Those who want one for Canada, on the theory that it will save money, might pause to consider that costs for the Quebec plan have risen 10.7 per cent a year since 1998-99, to about $4-billion from just over $1-billion.

Quebec has a more acute demographic problem than the rest of the country. Between 2010 and 2030, its work force is expected to drop by between 3 and 4 per cent, while Ontario's will rise by about 12 per cent. Fewer workers and more retired people will erode government's income, while putting more pressure on the health-care system.

The Quebec government bravely promises to lower annual spending increases on health care to 5 per cent, something it has not been able to do in the past decade. Still, that target looks more doable than Ontario's preposterous budget promise to lower its rate of health-care spending from 6 per cent to 3.

Quebec also proposes to raise new revenues only for health care, as other provinces have done by imposing health-care premiums through the income tax system. Quebec proposes a per-person $25 "contribution" in 2010, rising to $100 in 2011 and $200 in 2012, with low-income people exempted. The "contribution," a slippery word designed to avoid more precise words such as "tax" or "premium," will hit 3.2 million households and is supposed to raise $945-million for the health-care system.

The "contribution" is not radical by Canadian standards, but a $25-per-visit charge for seeing a doctor certainly is. Elsewhere, such a payment would be called a "user fee." It might seem to contravene the Canada Health Act. But by burying the fee in the provincial income tax, Quebec is hoping to win any court challenge or fend off a political assault.

Together, the per person "contribution" and the user fee are expected to raise $1.5-billion in four years for health care. Another proposed change - to issue taxpayers with an annual rendering of how much their use of the system really cost - has been tried in Britain and failed to influence individual behaviour.

The Quebec budget was at least honest. With health care rising faster than anything else, a government's options are to raise more revenues, try for more efficient health-care delivery, cut other spending, go further into debt or some combination of the three.

Quebec chose to raise more revenue. We'll now measure the political reaction from a population in Quebec, as elsewhere, inclined to think of health care as being "free." 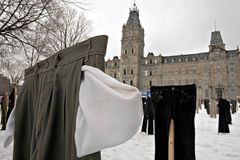