The struggle over Toronto's new King Street transitway presents the city with unavoidable questions: Who gets priority, the car or the streetcar? What, today and in future, is the best way to move the city's millions from place to place? What kind of city, ultimately, do we want?

The year-long pilot project on King began Nov. 12. The heavily used King streetcar – the busiest surface route in town – was given the right of way between Jarvis and Bathurst streets. Cars can no longer use that stretch of roadway as a thoroughfare. If they enter it at all, they must turn right at major intersections. Curbside parking is banned. The idea is to clear the way for the halting King car, which used to slow to a walk amid the rush-hour traffic.

Right off the bat, owners of restaurants, bars and other storefronts complained that their business was suffering. Customers were staying away because they were afraid they would not be able to park (even though there are thousands of parking spaces just minutes away in lots, garages and on streets).

Doug Ford, who says he is running for mayor this year against John Tory, called the King pilot part of a "war on the car," a favourite slogan of his late brother Rob. It's shaping up to be a big election issue.

With the clamour against the transitway rising, Mr. Tory announced some changes this week. The city will take steps to "animate" the street with warming stations, public art and street performers. It is also holding a design competition for more lasting improvements. The city will offer a $10 discount on some parking near King; add more drop-off and loading zones on the street; put in 90 parking spaces on side streets; adjust traffic-signal timing to make it easier for cars to turn; and put in better signs to help drivers understand how it all works. The aim, says the mayor, is to show that King is still open for business.

These are reasonable changes. Mr. Tory said from the start that this was an experiment, which is why it is called a "pilot" project. The city would monitor how it worked and tweak it as required. The troubles in the project's first two months seem to arise mainly from confusion. Making the new system as workable as possible for everyone – and spreading the word that the whole King Street area has not suddenly become hell on earth for drivers – makes good sense.

In the end, though, Mr. Tory can't make everyone happy. The whole point of launching the transitway was to give public transit in this corridor an edge over cars. It was to favour the majority. Studies showed that King carried 65,000 daily streetcar riders, compared with 20,000 cars.

All evidence is that it's working. The Toronto Transit Commission says that during rush hour the streetcar ride is not just faster but more reliable. Streetcars come at a steady pace instead of fits and starts. The experience is so much better that commuters are flocking to the King car. Rush-hour ridership is up by a quarter.

This is just what the city was hoping for. The aim of transit planners everywhere it to make commuting on streetcars, buses and subways an attractive alternative to travelling by car. The aim of city leaders just about everywhere is to reduce reliance on the automobile, cutting the pollution and relieving the congestion that is such a bane for modern cities. The King car was, for many, a miserable ride. Now it is better. That is a significant win.

Let's not fool ourselves. In a city that prioritizes transit, things will sometimes get harder for drivers. It is part of becoming a big city. You don't drive to a show in Manhattan and expect to park on the street outside. Toronto's downtown is Manhattanizing at a frantic pace. Office and condos towers are rising left and right. That's good for bars and restaurants in the long term. So is having a downtown where transit vehicles can actually move.

Though Mr. Tory is right to adjust the project and make the transition easier on local businesses, he must be honest with the public about what he is doing here. He is putting transit first, and cars second. It is the only way forward for 21st-century cities. 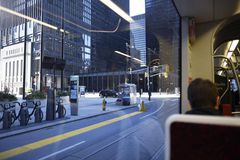 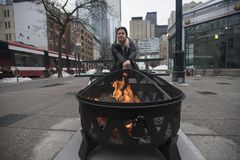