Alexandra Fuller is author of Cocktail Hour Under the Tree of Forgetfulness and Don't Let's Go to the Dogs Tonight: An African Childhood.

I am not now Zimbabwean, but for several years in the 1970s, my white settler parents owned a farm on the very eastern edge of what was then the rogue state of Rhodesia. They fought – my father as a conscripted soldier, my mother as a police volunteer – to keep the country white-run and avowedly out of the hands of communists. By any calculation, it was a questionable cause: roughly 200,000 whites trying to hold on to power in a country populated by about four million blacks. Ian Smith, Rhodesia's prime minister, campaigned in 1965 on a slogan of "a whiter, brighter Rhodesia " and for the next decade and a half, at least 30,000 people died over those words.

White revisionists of our old history like to forget the brutality that underpinned our whiter, brighter privilege; in their haste to applaud the order and cleanliness of the country back then, the easy sunlit life, they deliberately overlook the fact that the Rhodesians organized an economy that supported only whites and white interests. The vast majority of black Zimbabweans suffered, only a handful of black Zimbabweans – always trotted out for white revisionist interviews – look back at those years with any sense of nostalgia.

For a start, the war was long and brutal. It scarred generations. There were atrocities committed on all sides and within all sides, and that's another untended national wound. Nearly 13 years of civil war meant this: a whole nation of men and women ignoring their personal suffering in pursuit of universal freedom.

By late 1979, black liberation forces were coming into Rhodesia from camps in neighbouring Mozambique and Zambia faster than Rhodesian government troops could kill them. There were no reparations called for, no restitution demanded of the white community, no justice insisted upon. Having believed that they would be killed in cold blood for what they'd done to blacks over the generations, whites found instead a seeming-willing bedmate in Mr. Mugabe.

It was a long honeymoon for whites who mistook their comfort for their security. It was a very short honeymoon for the black Zimbabweans who'd yet to have much of either.

Working along fault lines well established by the white minority government before him – which is to say ethnic, racial and political – Mr. Mugabe went about dividing his nation and securing absolute power for himself.

"He understood and manipulated our weaknesses very well," the late Wilfred Mhanda told me when I was in the country five years ago. Mr. Mhanda, a former liberation commander, knew Mr. Mugabe intimately, and had never trusted the man's ability to rise above the wounds of the Rhodesia era.

"There is nothing more deadly than someone so profoundly insecure, mimicking the aggression of his oppressors and becoming an oppressor in turn," he said.

Throughout the 1980s and much of the 1990s, Mr. Mugabe tolerated corruption in his cabinet, as long as it came with loyalty to him. He tolerated the continuation of flourishing white-owned businesses and farms; they were leverage. Meantime, the country's economy gradually collapsed. By the mid-1990s, there were fuel shortages, civil servants were striking and liberation-war veterans began to demand the compensation they had been promised. Still, Mr. Mugabe stayed in power because, like the white government before him, he made the laws, and he felt empowered to break them; beginning, as the Rhodesian government had, with control of the votes, the media and the armed forces.

Then, in 1998, without consulting Parliament or his cabinet, Mr. Mugabe sent troops into the Democratic Republic of Congo to prop up the teetering regime of his personal crony Laurent Kabila at an eventual cost of almost $1-million (U.S.) a day. Zimbabwe's economic doom was sealed.

In 1999, the Movement for Democratic Change (MDC) was launched, headed by a former labour-union leader, Morgan Tsvangirai. The slogan of the party was "Chinja maitiro!" ("Change the way you are doing things!") Mr. Mugabe countered the political threat and increased dissatisfaction among his own supporters with a proposed change to the constitution that would allow the government to appropriate white-owned commercial farms without compensation.

The white honeymoon was over, but it had been a good, long one during which time only a very few whites had the courage to institute their own restitution toward black Zimbabweans and to challenge corruption.

Of course, racism makes no sense because it's insensible. During the Rhodesian regime, good, honest, caring black men were treated like dogs. It was not hard for Mr. Mugabe to switch that tableau.

So a nation patiently patched together a life of fewer basic government services – water, lights, roads – and more basic government shows of force – police, army, secret service. The country's economic disparity should have been visible from space: a handful of fat cats, the rest of the people "suffering like chickens," as Mr. Mhanda said.

Meantime, in spite of rumoured puffy ankles – cancer and heart disease were some of the whispered speculations – Mr. Mugabe appeared as robust as ever. Even when his eyes turned rheumy and it was no longer clear he was of entirely sound mind, he still reigned, his words sending shock waves of fear up an down the nation's spine, this toothless old thing.

What would it take to shift the man?

In the end, perhaps inevitably, it was a woman: Mugabe's second wife, Grace, a Shakespearean villain. She overreached in her flagrant grab for power and the generals who'd propped up Mr. Mugabe through thick and thin suddenly pulled the lever that slid the Old Man into overdue retirement; it's too late to hope Mr. Mugabe will be brought to justice. Like his predecessor, Ian Smith, he will likely die in exile, hands dripping with unwashed blood.

So much for justice, restitution; what of the future?

We've been here before.

Last time, Zimbabweans made the terrible mistake of not taking into full account the atrocities of the Rhodesian regime before launching into the hopeful promise of a new multi-ethnic Zimbabwe. Perpetrators were allowed to walk unimpeded, serenely, among their erstwhile victims. Nothing really changed for the elite. And so, ignoring the past, it was inevitably repeated.

Violence begets violence; hurt people hurt; violently governed people govern violently. This is the reason the story of Zimbabwe is so distressingly circular; no one can escape the basic shapes and patterns of the original wound.

The Old Man is gone, and Emmerson Mnangagwa – the Crocodile, they call him, for his ruthlessness – is in. It will take a powerful person to lead Zimbabwe out of the ashes; the last thing the country needs is another strong man. The future of the country depends on Mr. Mnangagwa's resolve not to dig into the same trenches of his two corrupt predecessors, Ian Smith and Robert Mugabe, looking to enrich only himself and those who look like him. The future of Zimbabwe depends on Mr. Mnagagwa pursuing the freedom of his people, 37 years after their independence. 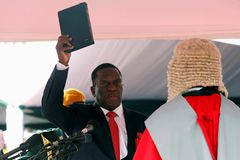 Ousted Zimbabwe finance minister Chombo faces corruption charges
November 25, 2017
Follow us on Twitter @globedebate Opens in a new window
Report an error Editorial code of conduct
Due to technical reasons, we have temporarily removed commenting from our articles. We hope to have this fixed soon. Thank you for your patience. If you are looking to give feedback on our new site, please send it along to feedback@globeandmail.com. If you want to write a letter to the editor, please forward to letters@globeandmail.com.
Comments